The Croix de Guerre, a Military Medal & a Seaforth Highlander

Highlander, Serjeant John MacKenzie MM was born on the 20th April 1896 in the of Muir of Ord, Ross-shire.   The youngest of 6 children to Donald & Isabella MacKenzie, he would tragically become the third son from this Scottish family to lay down his life in the Great War.   His two older brothers; Donald and Kenneth died in 1914 and 1915 respectively whilst serving with the Cameron Highlanders.

John volunteered for service early in the war and joined the 6th Seaforth Highlanders as a Private.   Arriving in France on the 1st May 1915, his outstanding qualities would result in  him being promoted through the ranks – before his ultimate death.   In November 1916, the Battalion  took part in the Battle of Beaumont Hamel; recapturing this town from the Germans – as one of the last acts in the Battle of the Somme.  According to the Inverness Courier published some time after John’s death; it was in this battle that his gallantry saw him promoted to Sergeant.  It would also result in him being awarded both the Military Medal and the Croix de Guerre – which was presented by the French Government for conspicuous gallantry and devotion to duty. 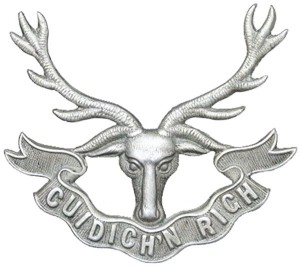 IMAGE RIGHT:  The cap badge of the Seaforth Highlanders.

On the 9th April 1917, the Seaforth Highlanders provided support on the right flank of the main Canadian attack on Vimy Ridge.   This action resulted in the capture of a series of German trenches, east of Roclincourt with the loss of 148 officers and men killed or missing.  Here, John MacKenzie was Mentioned in Despatches for his gallantry.

However, before 1917 had drawn to an end, the Battalion was thrown into yet another major action – taking part in the Battle of Cambrai at Flesquieres and Bourlon Wood in November of that year.  The Battalion War Diaries show that the Seaforths were involved in fierce fighting between the 20th and the 24th November 1917;  with many officers being killed and more junior staff taking over and leading the attacks forward.  It is believed that  John may have been one of these junior leaders,  since he is certainly also recorded in the Diaries as receiving a Bar to his Military Medal – during this time.

The War Diaries show that the Battalion was fighting on the Beaumetz – Morchies Line in March 1918.  This was a particularly unsuccessful period for the Allied Armies, the Germans cutting deep into their lines.  On the 25th March 1918, the last day of heavy fighting – John MacKenzie was reported missing and later presumed to have been killed in action on that day. 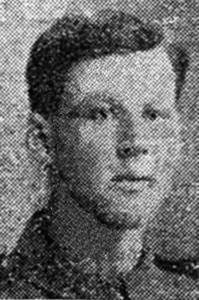 IMAGE LEFT:  The photograph of John MacKENZIE which accompanied an article featured in the Inverness Courier.

Just after Armistice Day, the Inverness Courier newspaper printed a brief article – featuring John MacKenzie.  The words contained in the story may be rather flowery by modern standards,  but I think they give us some indication of the quality of this young man:–

“Popular in the regiment, familiar owing to his long service, the famous 51st Division had few more intrepid fighters that this fine, manly youth from the heart of the Highlands.  His comrades will not forget him today when peace lightens the field of battle.”

Sadly, all of his comrades have faded away.   With the passing of these men – has gone the memory of his deeds.  So it is now up to our generation,  to  ensure that heroes – such as John MacKenzie are never forgotten.   Please assist his ancestors, to keep the torch burning.   His medals are somewhere in the hands of a private collector and his family would dearly like them returned.  Kath MacDonald would certainly be very appreciative if you could help to recover these medals for her husband, who is the great nephew of Serjeant John MacKenzie.   Please contact the Medals Gone Missing Administrator if you have these medals, or know anything about their whereabouts.

IMAGE RIGHT:  The Military Medal plus WW1 trio (1914-1915 Star, British War Medal and Victory Medal – alongside the Croix de Guerre; similar to what was posthumously awarded to Serjeant John MacKENZIE.

2 Responses to The Croix de Guerre, a Military Medal & a Seaforth Highlander