Mystery Object – Can you help Identify this? 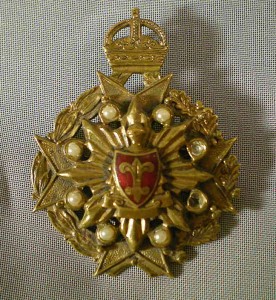 A piece of Militaria surfaced on ebay a little while ago – but nobody seems to know exactly what it is…..Can you help?

Ebayer Cynthia Kelly; who hails from Seattle in Washington State U.S.A – found this badge at a thrift shop in Bellevue, Washington. She listed the item on ebay; item #230266164867 and at auction’s end – David Daly was the successful bidder. The only problem being – he was not quite sure exactly what it was – that he had purchased. Subsequently, he contacted the medalsgonemissing administrator in a bid to ascertain it’s origin, but we had never seen anything else like it.

At a first glance, it appears to be some type of a “broach” or “sweetheart badge”. It measures about 1 3/4″ long and has a pin type arrangement on the back. It also has a ‘loop’ to the rear, near the top of the badge. It is reasonable to assume that this is to facilitate a chain or ribbon for hanging?

Essentially, the design features a crown (Queen’s Crown) above a wreath with the ‘St Johns Cross’ (also known as a Maltese Cross – amongst other names) evident underneath a shield. The shield is red in colour and it appears to be enameled.

The shield is of an English “knight” design and there appears to be a ‘knight’s head/helmet’ above the shield itself. There is also a splay of eight pearls in a circular fashion around the badge, and in the case of this particular piece – two pearls are missing from the right hand side.

Medalsgonemissing contacted an Australian Medal expert – Andrew Monkhouse who is a wealth of knowledge on Military Medals of the world. He in turn, contacted an associate – however neither of them could identify the item. The one thing we did agree upon, is that the piece of Militaria was ‘British’ in appearance and was possibly a sweetheart badge because of the pearls. What was certain, is that the item is not a Campaign medal of any description.

Whatever it is, this piece of militaria has certainly invoked a degree of interest amongst the numerous “collectors” that I have shown. When I questioned Cynthia (the seller) about her original purchase of the broach – she told medalsgonemissing, “It caught my eye and I listed it in hopes of seeing if anyone would know anything more about it.”

Well Cynthia and David, you have certainly created a point for discussion. If anybody out there recognises this piece of militaria – or can offer any insight as to exactly what it is……please share your knowledge with us and solve this mystery. Medalsgonemissing will offer a free “5 year listing” for any person who can shed some light to this question.

NOTE TO ALL SUBSCRIBERS: As of 6th June, 2009 – This item has now been identified as a Military CHAPLAIN’s Cap Badge with an unofficial modification of costume jewellrey. Thankyou to Howard SIMCOE and all of the other people who responded, for your information.

Gary Traynor is the volunteer Administrator of the Militaria based website MEDALSGONEMISSING. The aim of this "NOT FOR PROFIT" website is to reunite families, with lost War Medals and other items of militaria. Anything from medals to items of uniform. What Gary refers to as their "lost heritage". He has been actively involved in the Militaria world and researching of Military History for well over 30 years. As a result, Gary also conducts valuations and offers advice on all items of militaria. He has acted as advisor to a number of television and Foxtel productions; including Sir Tony Robinson's "Tour of Duty" series which featured on the History Channel. Gary is a field historian and conducts tours to Gallipoli, The Western Front, Kokoda and many other major battle sites around the world. He was a member of the Australian Army Reserve (UNSWR & 4/3 RNSWR) and served for 23 years with the New South Wales Police Force. He is perhaps the only person who has been employed at the Australian War Memorial in all three capacities .... as a volunteer, part time and full time employee .... starting as a qualified tour guide, working in the public galleries as an Information Assistant and finally Assistant Curator in Military Heraldry & Technology. Medalsgonemissing is a website that will assist you in locating your family's lost war medals and other awards. If you have an ancestor who served in any of the British Commonwealth Armed Services at any time - and whose medals are lost/stolen or simply missing....then so long as the medals are out there - this site will help you to locate them. However the site also contains articles of interest in relation to Military History, War Memorials & Uniforms / kit. Please explore our website as there is sure to be something of interest to you.
View all posts by gary →
This entry was posted in Military Medals, Military Memorabilia. Bookmark the permalink.