Canadian Law – Not in the Spirit of Remembrance 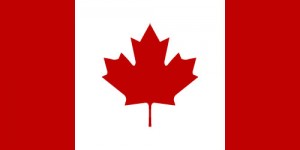 Marilyn LINCOLN is a very proud Canadian.  But she is even more proud of the fact that her father Edmund MILLER was one of those Canadians who gave up the best years of his life, to “do his bit” in a global war – so that later generations could enjoy the peace of a free world. 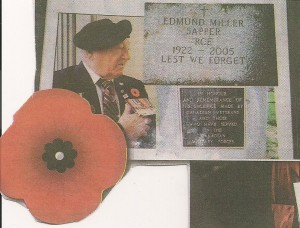 Edmund MILLER was a Sapper with the Royal Canadian Engineers (Queen’s Own Rifles) who saw over five years of military service.  He took part in “The Longest Day” when he landed at Juno Beach in Normandy on the 6th of June, 1944.  And his impressive array of War Medals is testimony to the fact that he did not shirk his responsibilities when his country needed him most.  Like their fathers who served during the First World War and are now gone – it is a sad fact that the ranks of our World War Two veterans are dwindling.  Edmund MILLER, along with many of his mates – now rests with God.  And the world is a better place, because of men like him.

However, an email from his daughter Marilyn has prompted MEDALS GONE MISSING to lend support;  in opposal to a draconian Canadian Law which prohibits a civillian from wearing the medals of a deceased relative during periods of commemoration.  For Australians, our right to wear military service medals which were awarded to our ancestors is something which we have never had to think about.  Whilst an actual veteran is entitled to wear his or her own medals on their left side – when that person passes on – we take it upon ourselves to keep their memory alive by wearing their medals with pride;  on the right side of our chest.  This is the same in other nations of the Commonwealth, such as Great Britain and New Zealand.

So why not Canada?  If you have ever been to a Remembrance Day Service – undoubtably you have heard a recital of the poem “In Flanders Fields” which was written by a Canadian War Veteran (John McCrae) on the 3rd of May, 1915.  It is hard to forget the lines “Take up our quarrel with the Foe…..To you from failing hands we throw….The torch, be yours to hold it high…..If ye break faith with us who die”.  Metaphorically speaking; when an old soldier passes his war medals onto his next of kin – is he NOT throwing you his “torch” to hold up high?  And should the benefactor of these war medals, simply throw the hard earned medals into the back of a wardrobe – never again to see the light of day…..are we not “breaking faith” with those who die? 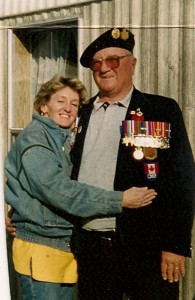 If a family member cannot wear their relative’s service decorations….then these war medals will disappear from sight and lose their human connection.  The medals, along with the memories that they hold – will be condemned to decay in drawers and cupboards…. or behind glass cabinets; to become just a relic of the past.  When a war medal is worn by a child or grand-child of a veteran, they become a “living” memorial and a tangible symbol of that person.  They do not glorify war…. instead they glorify the human spirit that rose up in the face of adversity.  One cannot help but recall the expression “We gave our today…. for your tomorrow”.

Marilyn LINCOLN is “taking up our quarrel” – not with the foe….but with her own Government.  She has written to all Govenment Offices in a bid to have this law changed.  She has even corresponded with Her Majesty Queen Elizabeth – in a bid to have a bill passed, permitting a relative to wear their ancestor’s war medals on days of commemoration.  In a statement written to MEDALS GONE MISSING, she has made the plea “I just want to be able to honour my father by displaying his medals on the right side of my chest during Remembrance Day Ceremonies.  I want to pin his name and a photo of him in uniform beside the medals so that everyone will know who I am remembering; and my father will never be forgotten”.

Having spoken to many veterans over the years, I have heard countless times – the desire of the veteran for their grandchildren to wear their medals, when they are gone.  Surely the wishes of these men should be upheld…it is the least we can do for them.

IMAGE RIGHT:  A scanned photograph from her local newspaper, showing Marilyn LINCOLN with her father’s coat and medals.

As an Australian citizen, I had no idea that the Canadian Government had adopted this stance with regards to the wearing of war medals by a relative.  I would go so far as to say that the majority of people from other British Commonwealth countries were equally as ignorant as I – with regards to this situation.   Marilyn is asking that we all rally together to lend our support – all across the globe….like our fathers did in 1939 – to right this wrong.  If you support Marilyn in her endeavour to commemorate the service of Canadian Servicemen and women, please click on the link below.

She already has the support of her local Veterans Legion, but they cannot do this alone….and with your support – we can do justice to these servicemen and women who no longer have a voice to be heard.  This modern generation has a debt to repay – and a necessity to honour the memory of those generations who have gone before us.  For if we do not remember the past, then how can we have a plan for the future.

In the words of John McCrae “If ye break faith with us who die…….We shall not sleep….though Poppies grow in Flanders Fields”

23 Responses to Canadian Law – Not in the Spirit of Remembrance