Frederick PRENTICE, Service Number 2597 was a member of the 12th Infantry Battalion, AIF during the Great War.  The First World War Embarkation Roll records his departure from Adelaide on the 26th of August, 1915 aboard RMS Morea with the rank of Private.  His service record via the National Archives of Australia indicates he arrived at Mudros during December 1915 and did not serve on Gallipoli.  This Aboriginal Australian was born in Powells Creek, Northern Territory and was the recipient of a Military Medal for his service on the Western Front; eventually attaining the rank of Corporal.  He saw considerable action including service at Pozieres, Bullecourt, The Somme and Passchendaele.  He died in Katherine in 1958 and was described as a ‘half-caste’ Maori by Police. 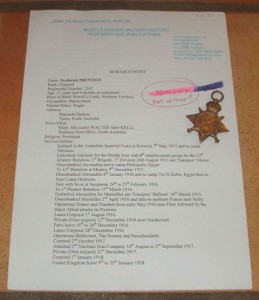 IMAGE RIGHT:  The First World War medal (1914-1915 Star) of Private Frederick PRENTICE who was one of many Aboriginal Australians who answered the call during the Great War.  This image appeared on the ebay listing at the time of the sale.  The research was conducted by Mostly Unsung Heroes.

The 1914-1915 Star was sold by a Sydney militaria dealer who unfortunately has an unscrupulous reputation.  Subsequently he is not prepared to assist in any way.  Medals Gone Missing is interested in contacting the winner of this auction.  We wish to point out that we have information which may interest the winner of this medal and we are not attempting to recover the award.  However, if this person is interested in selling the medal back to the descendants of Frederick PRENTICE, this may be negotiated. 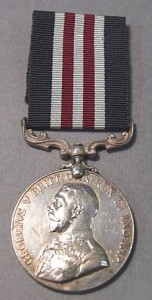 IMAGE LEFT:  The Military Medal, similar to that awarded to Corporal Frederick PRENTICE, an Indigenous Australian who served in the Australian Imperial Force during the Great War.

Please CLICK HERE for a link to a story about Frederick PRENTICE.  If you would like to know more about Frederick’s history, you may contact Christine Cramer on the following email:-  cramer@staff.usyd.edu.au

PLEASE NOTE:  Medals Gone Missing wishes to point out that Colonel Neil C Smith OAM operating as “Mostly Unsung Military History Research and Publications” is a very reputable historian and is NOT the dealer referred to in the above text.  Nor is he associated with the Sydney based militaria dealer mentioned above.  Despite the fact that this emblem was not in existence during the time of the First World War, the Aboriginal flag has been used in this blog out of respect of all Indigenous Australians who have served (and continue to serve) in the Australian Armed Forces.