The Republic of Vietnam Campaign Medal (Vietnam Star) pertaining to Major John Frederick MILLER (Service Number 27234) has come into our possession. John served during the Second World War and his service number was QX42382. According to the World War Two Nominal Roll, John served in the AMF (Australian Military Force) under the service number Q141624.  He later joined the AIF and was allocated the service number QX42382.  With such a low service number, he must have shown fine leadership qualities as he completed his service with the rank of Captain.   John’s posting on discharge was MGO Branch Design Section (Master General of Ordnance Branch Design Section). 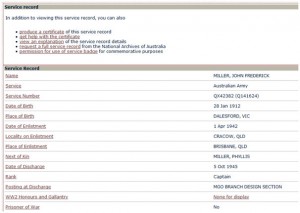 Without a thorough search of his service history, it is not known if John Frederick MILLER continued to serve in reserve after his discharge in 1945.  However John  served with the Royal Australian Artillery during the Vietnam War and attained the rank of Major.  Records indicate he served in Vietnam under the service number 27234. 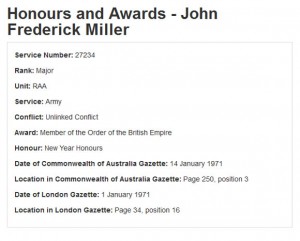 IMAGE LEFT:  The Honours and Awards records, reflecting the fact that 27234 Major John Frederick MILLER was awarded the Member of the Order of the British Empire in 1971.

John Frederick MILLER was awarded the OBE in 1971, this honour appearing in the 01 January London Gazette of that year.

This Republic of Vietnam Campaign Medal clearly displays his service number of 27234 on the reverse.  Being a non-Commonwealth commissioned medal, it is ‘hand engraved’ as opposed to being correctly impressed with his name.  His name has been erased however under magnification, the initials J.F.M are discernable.  It is not known how this medal left his possession and his descendants may not be aware of the existance of this medal. 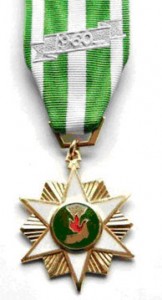 IMAGE RIGHT:  The Republic of Vietnam Campaign Medal, of the type awarded to Major John Frederick MILLER of the R.A.A.

This medal is not for general sale and will only be returned to his direct descendants upon strict proof of relationship.  Medals Gone Missing has sought the assistance of Ancestry.com in a bid to locate a descendant of this fine officer.  Please CLICK HERE to visit Ancestry.com