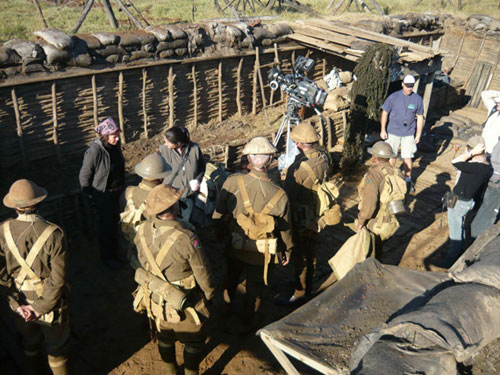 LEGACY AUSTRALIA began production in May, of a new Television Commercial – to launch their Advertising Campaign for 2009. Medals Gone Missing staff had the privilege of taking part in the historical re-enactment aspect of the film shoot; in conjunction with First World War enthusiasts from the ’18th Battalion’ Living History Group. 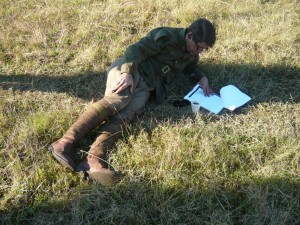 PHOTO RIGHT:  One of the lead actors – Lindsay FARRIS, studying his lines before the commencement of filming.

And I am very pleased to say that the Production Company and crew of MARTIN BROWN FILMS were meticulous in bringing this concept to life. I am always apprehensive when I hear that a ” historical wartime scene” will be re-created and filmed for television. All too often, artistic licence is applied and accuracy to ‘uniforms’ and ‘equipment’ is poorly researched or merely guessed at. I have seen actors from other productions, adorned in 37 Pattern Infantry Equipment or miscellaneous items of kit when shooting a First World War battle scene. Well in this case, I was pleasantly surprised and very impressed with the efforts made by Martin BROWN’s Film Company. Whilst one can always rely on the effort for authenticity – made by historical groups such as the 18th Battalion Re-enactment Society; clearly Martin and his crew have made a strong and concerted effort to “get it right”. The uniform, Brodie Pattern Helmet and Pattern 08 Infantry Equipment adorning the two lead actors were correct for the era and the trench system at Cobbity (near Narellan, New South Wales) provided a very authentic backdrop. In fact, the trench system used – was the same set, constructed for the ‘Wolverine’ feature film.

Filming of the actual “battle scene” took place on Friday the 29th of May, 2009. After a call went out for ‘extras’ to take part in the action sequence; Medals Gone Missing placed an ‘expression of interest’ listing on the Events List – to any military enthusiast who could supply their own uniform and equipment. A great response was received and my thanks go out to all of those people who responded with their inquiries. The fact that the shoot took place on a weekday precluded many, but sufficient numbers were eventually supplied by the 18th Battalion Re-enactment Society to fill the trench. 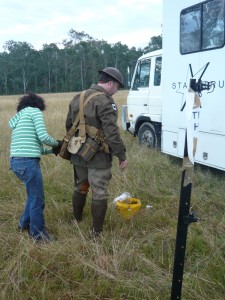 I give credit to the Costume Designer Wendy CORK and her assistants who applied the make-up; and tirelessly ‘dirtied’ up the actors and extras to provide some realism to the simulated mud and blood of the trenches. The Assistant Director Naomi ENFIELD ran a very tight ship and was certainly “N.C.O” material. Her efficient organisational skills and direction were a credit to her. And Director Diana LEACH was simply a pleasure to deal with; always encouraging those around her and ready with a friendly smile to us extras who were clearly ‘amateurs’ (Graham excluded in this comment). Whilst there were far too many individuals to name, the whole team effectively and efficiently went about their business to achieve the common goal for LEGACY – which all agree is a very worthy cause. 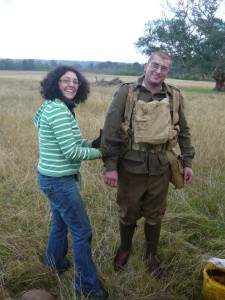 But I wish to give full acknowledgement to the two fine young actors, who will form the central characters of the “30 second” short story. Jamie TIMONY and Lindsay FARRIS gave an absolutely outstanding performance in what proved to be a very ‘physical’ role. Constant takes and re-shoots to get the ‘right shot’, required Lindsay to drag the body of his fallen comrade (Jamie) back from the firing step of the trench – on numerous occasions. In accordance with the LEGACY concept, Jamie produced a photograph of his “sweetheart” and letters from home…..he then swore Lindsay to undertake an oath to “look after my missus and the kids”. In a very emotional response, Lindsay acknowledged that the family of our fallen ANZACS back home in Australia would be looked after and the concept of LEGACY is born.

We have all seen examples of “questionable acting” in films and advertisements, but these two roles were very well casted – and I am looking forward to seeing the final result which screens to air around August 2009. Until you witness a production of this type actually in progress, one does not fully appreciate the pressures placed upon an actor to “perform” . With the expectations of a Production Crew placed upon them… and a score of extra’s gazing on – I applaud the efforts of these two young performers. I am a very harsh critic when it comes to Military Re-enactments. The boys immersed themselves in the role and I commend Jamie and Lindsay in their performances. At one stage, the emotion of the theatrical “death scene” was so strong – that it brought a lump to my throat. 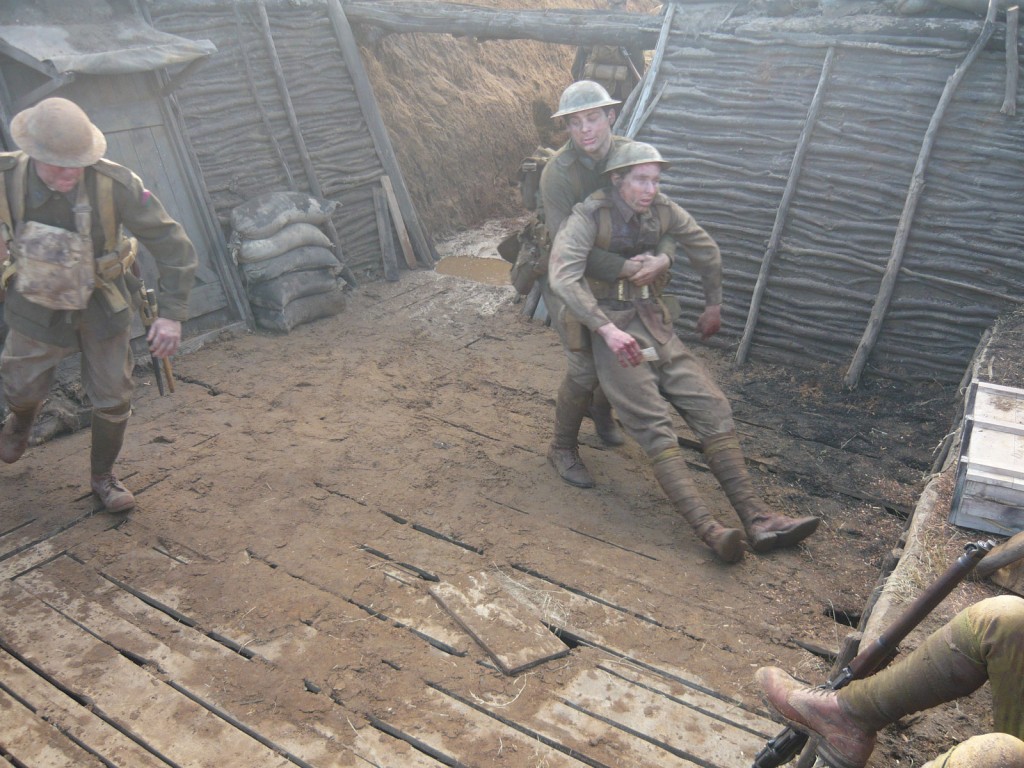 For the absolute purist – who may notice the absence of revetment on some of the trench walls (in particularly the ‘death scene’ in the narrow portion of the trench) I wish to emphasize that in accordance with the subject charity being LEGACY; the production was shot on a shoestring budget. Much of the expertise and resources were volunteered or donated so as to reduce the overheads to the client (being Legacy Australia). So we can take our ‘hats off’ to Martin and his crew for their ANZAC spirit in helping out a good cause. 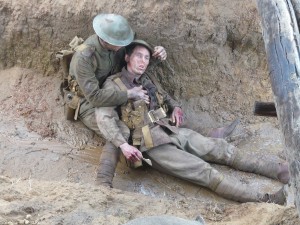 PHOTO LEFT:  Actor Lindsay FARRIS embraces Jamie TIMONY whose character has been fatally wounded in what was a very moving performance.

For those who are not familiar with the work of LEGACY, this charity is a voluntary run organisation which provides services to Australian families who are suffering financially or socially – after the death of a spouse or parent as a result of their defence force service. LEGACY AUSTRALIA currently cares for approximately 115,00 widows and 1,900 children and dependants throughout this country.

You can assist LEGACY by becoming a volunteer and contributing in many ways. The existence of LEGACY is most evident during LEGACY week – where badges are sold to the general public and the proceeds are administered to those in need. To become a volunteer, simply go to the LEGACY website where an online form can be found and submitted. They can be contacted on telephone (Freecall) 1800 534229 or email inquiries to enquiries@legacy.com.au LEGACY is a great way to help the families of those who have given all for this great country of ours.

In conclusion – I wish to pass on my thanks to Martin BROWN and Kon MALINAS for allowing us the privelege of taking part in this memorable occasion. If any future film productions of a Military theme come to fruition in the near future – I can only hope that the MARTIN BROWN FILMS is involved. The LEGACY of Australian Servicemen was certainly in good hands. 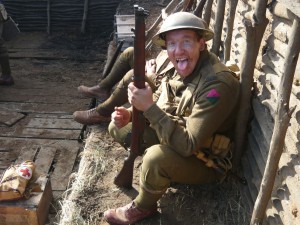 PHOTO LEFT:  18th Battalion member James ‘Bluey’ DOWNEY shows the make-up that was applied to his teeth to give that ‘aged’ look, such was the attention to detail demanded by Producer – Martin BROWN. 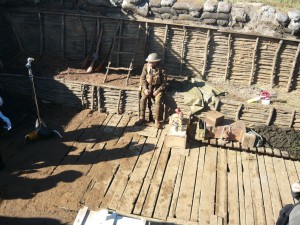 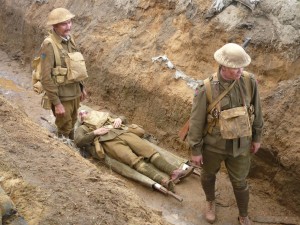 PHOTO LEFT:  Stretcher Bearers Daryl BACH & Peter MARTIN from the 18th Battalion Living History Group prepare to carry their “wounded” comrade, in a scene that could easily be mistaken for 1916. In terms of War Medals awarded for bravery, more gallantry medals have been granted to soldiers involved in acts of ‘saving life’ rather than during a feat of arms.
The 18th Battalion AIF Living History Group was formed to commemorate the courage and sacrifice made by Australian troops during the conflict of 1914-1918. They are sometimes called upon to play the role of “extras” in film productions such as this….their last outing involved participation in the filming of “Ghosts of War”. They also participate in Anzac Day parades and other events of Commemoration. If you are interested in preserving the Spirit of Anzac and joining the group, please contact President: James ‘Bluey’ DOWNEY on mobile 0408168671 OR Secretary: Peter MARTIN on mobile 0418865235 or email veteranlegend@bigpond.com.au
1914-1915 Star, British War Medal & Victory Medal awarded during the Great War 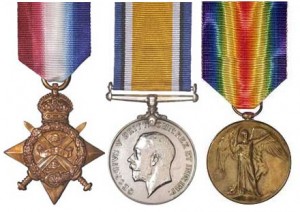 Gary Traynor is the volunteer Administrator of the Militaria based website MEDALSGONEMISSING. The aim of this "NOT FOR PROFIT" website is to reunite families, with lost War Medals and other items of militaria. Anything from medals to items of uniform. What Gary refers to as their "lost heritage". He has been actively involved in the Militaria world and researching of Military History for well over 30 years. As a result, Gary also conducts valuations and offers advice on all items of militaria. He has acted as advisor to a number of television and Foxtel productions; including Sir Tony Robinson's "Tour of Duty" series which featured on the History Channel. Gary is a field historian and conducts tours to Gallipoli, The Western Front, Kokoda and many other major battle sites around the world. He was a member of the Australian Army Reserve (UNSWR & 4/3 RNSWR) and served for 23 years with the New South Wales Police Force. He is perhaps the only person who has been employed at the Australian War Memorial in all three capacities .... as a volunteer, part time and full time employee .... starting as a qualified tour guide, working in the public galleries as an Information Assistant and finally Assistant Curator in Military Heraldry & Technology. Medalsgonemissing is a website that will assist you in locating your family's lost war medals and other awards. If you have an ancestor who served in any of the British Commonwealth Armed Services at any time - and whose medals are lost/stolen or simply missing....then so long as the medals are out there - this site will help you to locate them. However the site also contains articles of interest in relation to Military History, War Memorials & Uniforms / kit. Please explore our website as there is sure to be something of interest to you.
View all posts by gary →
This entry was posted in Military Memorabilia. Bookmark the permalink.