An American Dog Tag, issued to a man who served in the United States Army (U.S. Army)  in New Guinea during World War 2  has been found at the battlefield near Sanananda village.

Issued to an American G.I. in the New Guinea campaign, sadly the full name of the soldier is not known, due to the fact that the dog tag (also refferred to as ‘meat tags’) has been damaged and the last few letters of the man’s surname are missing.  However, what is clear is this G.I.’s service number (serial number) which is 33008493.   Whilst only part of his surname is legible, it appears that it may in fact be ‘Robert D. McCULLOCH’ or similar.  Other possibilities are ‘Robert D. McCULLOUGH’ …… ‘Robert D. McCULLUM’ or ‘Robert D. McCULLAM’. 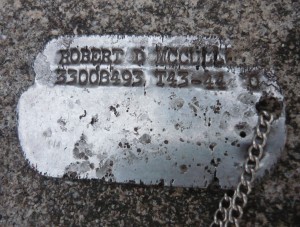 IMAGE RIGHT: The U.S. Army dog tag, showing the name:- Robert D. MCCULL??? and the service number of 33008493. The Medals Gone Missing Administrator is not familiar with the context of the information “T43-44” and is seeking clarification from any American experts or other persons who may be able to interpret the meaning of this text.

The dog tag is in the possession of a village elder by the name of Annanius MONGAGI.  This gentleman is also the custodian of the Sanananda Museum and caretaker of a war memorial, dedicated to the Australian 55/53rd Infantry Battalion  A.M.F. (Australian Military Forces).  Annanius is passionate about preserving the history of his local area and is an active participant in the commemoration ceremonies which are conducted by Australian Tour Company – Kokoda Historical on each visit.  He showed this dog tag which he had recovered from the battlefield to a party of Australian trekkers and indicated his desire for the family of this soldier, to know that it has been recovered and is in his safe keeping. 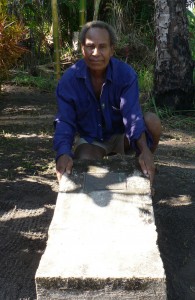 As fortune would have it, one of the Australians present at this time – currently lives in the United States. Australian ex-pat Peter KERR, originally from Dromana in Victoria, currently resides in Wisconsin and will be speaking to his local branch of the American Legion in the near future, in a bid to ascertain the identity of this man. Due to the presence of this dog tag on the battlefield, it is a sad fact that this man may have been killed in action and his body never recovered. However, Annanius did state that there were no bones or remains in the vicinity, so the fate of the soldier cannot be conclusively determined at this time. Perhaps once contact is made with a descendant of this soldier, the result of his fate will become clear.

The 126th Regiment was commanded by Colonel Clarence TOMLINSON of the U.S. Army. Whilst the men of their sister regiments (the 127th and the 128th Regiments) would be engaged at nearby Buna, elements of the 126th would enter the fray that was Sanananda, on the 22nd of November, 1942. The Japanese had set up a defensive perimeter astride the Sanananda Track, approximately 4 kilometres from the coastal village. In this vicinity, the Sanananda Track intersects with the Killerton Track, forming what was commonly referred to as ‘the Killerton Track junction’. This defensive perimeter took the form of a large “horse shoe” type formation; with the bottom curve of the ‘horse shoe’ facing the Australian attacking force (which had come from the direction of Kokoda to the south). These elements of the 126th (two companies of Tomlinson’s 3rd/126th) had began a flanking movement to the left, towards Killerton Point. They made their way through the swamps and jungle, so that they remained to the west of the Killerton Track. Their attack was to occur on the 23rd of November, however it did not eventuate until three days later; on the 26th. Once in position, this attack …. made in an easterly direction, would take them across the Killerton Track and behind the Japanese lines. The American troops managed to force their way onto the Sanananda track, effectively cutting off the Japanese Lines of Communication. The men of the 126th dug in – and held on for grim life …. establishing a position or ‘road block’ across the track. Effectively, these men became an “island” of Allied troops – surrounded by a “sea” of hostile Japanese. This position would eventually contain around 250 men and it could only be supplied by sending the supply parties through enemy territory; mostly during the hours of darkness. On the 1st of December, a supply party which was being led by Captain Meredith HUGGINS made it through to the position and he assumed command when Captain SHIRLEY was killed. This position would from this point on, forever be known as “Huggins Road Block”. The ground at Huggins Road Block was either underwater, or sodden swampy land and perhaps – was considered one of the worst malarial areas in the world. The following statement is reported by author Peter Brune regarding an Australian veteran of the 7th Division Cavalry Regiment. The date of the digger’s observation is on, or around the 22nd of December, 1942:- “Ben Love was sympathetic towards the US troops at Huggins when he found they had been there 23 days. The GI’s had no soap but were prepared to barter sweets. While sitting in his weapon pit, Love noticed an insignificant rough cross close by. He looked closely and found it marked the grave of a boy from Michigan” (page 153, ‘A Bastard of a Place’) The men of the 126th Regiment would hold this position until the 8th of January, 1943 when they were relieved by the U.S. 163rd Regiment of the 41st Division. Page 274 of Peter Brune’s “A Bastard of a Place” indicates that only 165 of the original 1400 men walked out of the area.

Around the 16th of January, 1943, the U.S. Battalions of the 127th Regiment joined the Sanananda battle, having gone north along the Killerton Track and then swinging around to the east to advance upon Sanananda Point. However, on the 18th of January – the 163rd Regiment was still held up in the area of Huggins Road Block and this area would be the very last in the area, to be finally cleared of the Japanese on the 22nd of January, 1943 (despite the last resistance on the Sanananda Track occurring the day before, on the 21st of January). To quote author Peter Brune again, “Survivors later said that the Sanananda actions were the worst of the entire war” (Page 297 ‘A Bastard of a Place’)

So until further information is forthcoming, it cannot be established which unit Private Robert D. MCCULLOUGH served in, though weight of numbers may suggest either the U.S. 126th Regiment of the 32nd Division, or possibly the 163rd Regiment of the 41st Division. 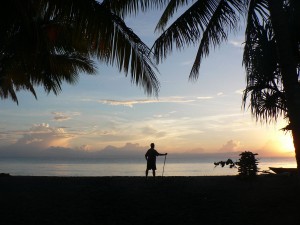 IMAGE RIGHT: Sunrise over the Solomon Sea, at Sanananda. This photo was taken of an Australian trekker by the name of Michael Elgey in 2008 and with such natural beauty, it is difficult to image that this idyllic stretch of coast was once ravaged by war. With so many American soldiers who sadly lost their lives in this area, it is an unfortunate fact that the Sanananda locality is rarely visited by citizens of the United States.

Medals Gone Missing would appreciate the assistance of any person who could possibly help us to locate the family of this U.S. Serviceman.

Gary Traynor is the volunteer Administrator of the Militaria based website MEDALSGONEMISSING. The aim of this "NOT FOR PROFIT" website is to reunite families, with lost War Medals and other items of militaria. Anything from medals to items of uniform. What Gary refers to as their "lost heritage". He has been actively involved in the Militaria world and researching of Military History for well over 30 years. As a result, Gary also conducts valuations and offers advice on all items of militaria. He has acted as advisor to a number of television and Foxtel productions; including Sir Tony Robinson's "Tour of Duty" series which featured on the History Channel. Gary is a field historian and conducts tours to Gallipoli, The Western Front, Kokoda and many other major battle sites around the world. He was a member of the Australian Army Reserve (UNSWR & 4/3 RNSWR) and served for 23 years with the New South Wales Police Force. He is perhaps the only person who has been employed at the Australian War Memorial in all three capacities .... as a volunteer, part time and full time employee .... starting as a qualified tour guide, working in the public galleries as an Information Assistant and finally Assistant Curator in Military Heraldry & Technology. Medalsgonemissing is a website that will assist you in locating your family's lost war medals and other awards. If you have an ancestor who served in any of the British Commonwealth Armed Services at any time - and whose medals are lost/stolen or simply missing....then so long as the medals are out there - this site will help you to locate them. However the site also contains articles of interest in relation to Military History, War Memorials & Uniforms / kit. Please explore our website as there is sure to be something of interest to you.
View all posts by gary →
This entry was posted in Honour Roll - U.S. Stories, Military Medals, Missing Militaria - Now Found!. Bookmark the permalink.