The U.S. Army serviceman whose Identification Tag (colloquially referred to as ‘Dog Tags’ or ‘Meat Tags’) which was discovered in distant Papua New Guinea  has been positively  identified.  The dog tag was located by a Papuan elder, Annanius MONGAGI of Sanananda Village on the north east coast …… an area which locals strongly boast is the “start and finish” of the Kokoda Track.  Whilst the first six letters of the soldier’s name were clear, the last letters were lost due to damage occurred to the actual identity disc.  It can now be said with certainty, that the identification tag is that of 33008493 Private Robert D. MCCULLOUGH of the United States Army.

Thanks to Mr David Howell of Kokoda Historical who referred us to THE NATIONAL ARCHIVES (U.S. Government sponsored website), we managed to correspond his Service Number which is evident on his I.D. tag, to the official record which details his enlistment file.  Please click on the link below, to see the Enlistment details of Private Robert D. McCULLOUGH.

What is still unknown, is the ultimate fate of Private Robert D. McCULLOUGH.  We sincerely hope that he survived this action around Sanananda and made it back to the United States; where he fathered many children and grew old.   We are still seeking to make contact with his family descendants and inform them of the fact that one of his dogtags has been found in the jungle of the Sanananda battlefields.  No doubt they would be shocked to learn that part of their heritage, still exists in far away Papua New Guinea. 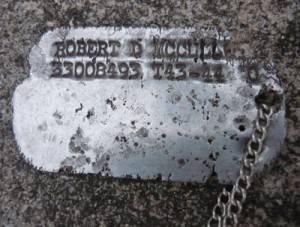 IMAGE RIGHT: The Identification Tag (dog tag) of Private Robert D. McCULLOUGH. If our interpretation of the records is correct, this man was born in Iowa but resided in Fairfax County, Virginia. Do you know this man? If so, please contact the Medals Gone Missing Administrator for further details. (Please click here to refer to the initial report of Private Robert D. McCULLOUGH’s dogtag in the ARTICLES OF INTEREST column of the Medals Gone Missing website).

Whilst we are certainly not experts on American military records, it appears that Robert D. McCULLOUGH was born during the year 1913 in Iowa, which made him approximately 28 years old when he entered military service.   Having completed four years of college – in civil life, he worked as a ‘general office Clerk’ and resided in Fairfax County, Virginia.  Private McCULLOUGH enlisted into the United States Army (U.S. Army) on the 5th of April, 1941 at Baltimore in Maryland.  Interestingly, he enlisted well before the date that Pearl Harbour was bombed (the bombing of Pearl Harbour on December the 7th, 1941 bringing America into the Second World War).   The records state that he was a “white” male, a citizen of the United States of America and a single man with no dependants. 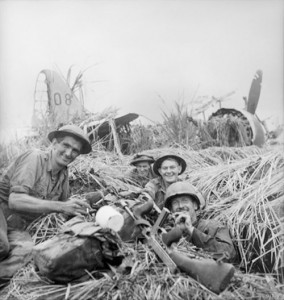 IMAGE LEFT: Australian and American troops fought side by side together, at the ‘battle of the beach heads’ on the northern coast of New Guinea during December 1942/January 1943.  Whilst the U.S. 126th, 127th & 128th Infantry fought at Buna (where this photograph was taken), it was the U.S. 126th Infantry which initially fought at Sanananda.  These two coastal locations are only a matter of a 3 hour leisurely walk from eachother.  Later during this campaign, the U.S. 1/163rd and the U.S. 127th Regiments were also engaged in the Sanananda area.

It is still hoped that Australian adventurer, Mr Peter KERR who was present at Sanananda in April of 2010 – can conduct an investigation and attempt to locate the descendants of Private Robert D. McCULLOUGH.  Peter currently resides in Wisconsin and will be seeking the assistance of the American Legion to track down any person who may be related to Private McCULLOUGH.

Alternatively, there may still even be other U.S. Servicemen who are veterans of the U.S. 126th, 127th or 163rd Regiments who served with and knew Private McCULLOUGH.  If so, we would dearly love to hear from you.  It would be very fitting if his descendants would consider coming to New Guinea to personally retrieve his dog tag, and see where this soldier fought for his country.  If you wish to know more about visiting the Sanananda Battlefield and seeing the dog tag first hand, please contact Kokoda Historical for details on how to visit this area.

If you have other U.S. dog tags (Identity Discs) in your possession and wish to have them correlated to their respective serviceman, please click on the following link to visit the American website THE NATIONAL ARCHIVES   http://www.archives.gov/

Gary Traynor is the volunteer Administrator of the Militaria based website MEDALSGONEMISSING. The aim of this "NOT FOR PROFIT" website is to reunite families, with lost War Medals and other items of militaria. Anything from medals to items of uniform. What Gary refers to as their "lost heritage". He has been actively involved in the Militaria world and researching of Military History for well over 30 years. As a result, Gary also conducts valuations and offers advice on all items of militaria. He has acted as advisor to a number of television and Foxtel productions; including Sir Tony Robinson's "Tour of Duty" series which featured on the History Channel. Gary is a field historian and conducts tours to Gallipoli, The Western Front, Kokoda and many other major battle sites around the world. He was a member of the Australian Army Reserve (UNSWR & 4/3 RNSWR) and served for 23 years with the New South Wales Police Force. He is perhaps the only person who has been employed at the Australian War Memorial in all three capacities .... as a volunteer, part time and full time employee .... starting as a qualified tour guide, working in the public galleries as an Information Assistant and finally Assistant Curator in Military Heraldry & Technology. Medalsgonemissing is a website that will assist you in locating your family's lost war medals and other awards. If you have an ancestor who served in any of the British Commonwealth Armed Services at any time - and whose medals are lost/stolen or simply missing....then so long as the medals are out there - this site will help you to locate them. However the site also contains articles of interest in relation to Military History, War Memorials & Uniforms / kit. Please explore our website as there is sure to be something of interest to you.
View all posts by gary →
This entry was posted in Honour Roll - U.S. Stories, Military Medals, Missing Militaria - Now Found!. Bookmark the permalink.