I am searching for the family of Private G.WHEELER who served with the British Army during the Great War.  At this time, I do not have any personal details about G. WHEELER other than he was a Private in the British Army Service Corps and his service number was M2-182031 and he came from the United Kingdom. 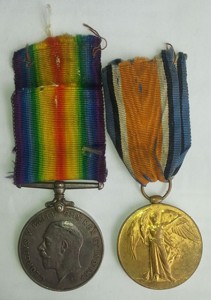 IMAGE RIGHT:  The British War Medal and Victory Medal awarded to Private G. WHEELER who served with the Army Service Corps during the First World War.  Both of these war medals are hanging from their original medal ribbon.

He may have immigrated to Australia after the First World War however there is no direct proof of this, other than the fact that his war service medals (British War Medal and Victory Medal) ended up in my father’s possession.  With the passing of my father, our family have absolutely no idea how they ended up amongst his belongings. 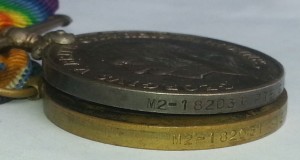 I wish to re-unite these missing war medals with a direct descendant of G. WHEELER but at this time I have very little to work on, in terms of his identity.  We have no idea of his first name, his town of birth or who his next of kin was. 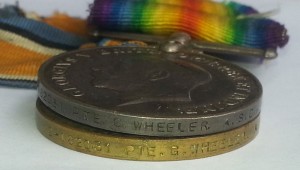 IMAGE RIGHT: The medals are impressed with the name of the medal recipient, G. WHEELER.  With the Centenary of the First World War now upon us, I am hoping to find his direct descendants as his missing medals are an important part of his family history.

We have conducted a thorough search of the CWGC (Commonwealth War Graves Commission) records and there does not appear to be a man by the name of G. WHEELER (service number M2-182031) of the Royal Army Service Corps who lost his life during the Great War.  Also, the medals appear to be well worn which may suggest they were used by the recipient for many years during commemorative functions. 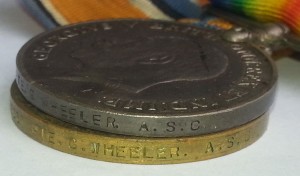 I come from a military family and I know how important war service medals are.   If anybody is a direct descendant of G. WHEELER whose service number was M2-182031 then I would very much like to hear from you.  The missing medals are not for general sale and their return will be upon strict proof of relationship.

Gary Traynor is the volunteer Administrator of the Militaria based website MEDALSGONEMISSING. The aim of this "NOT FOR PROFIT" website is to reunite families, with lost War Medals and other items of militaria. Anything from medals to items of uniform. What Gary refers to as their "lost heritage". He has been actively involved in the Militaria world and researching of Military History for well over 30 years. As a result, Gary also conducts valuations and offers advice on all items of militaria. He has acted as advisor to a number of television and Foxtel productions; including Sir Tony Robinson's "Tour of Duty" series which featured on the History Channel. Gary is a field historian and conducts tours to Gallipoli, The Western Front, Kokoda and many other major battle sites around the world. He was a member of the Australian Army Reserve (UNSWR & 4/3 RNSWR) and served for 23 years with the New South Wales Police Force. He is perhaps the only person who has been employed at the Australian War Memorial in all three capacities .... as a volunteer, part time and full time employee .... starting as a qualified tour guide, working in the public galleries as an Information Assistant and finally Assistant Curator in Military Heraldry & Technology. Medalsgonemissing is a website that will assist you in locating your family's lost war medals and other awards. If you have an ancestor who served in any of the British Commonwealth Armed Services at any time - and whose medals are lost/stolen or simply missing....then so long as the medals are out there - this site will help you to locate them. However the site also contains articles of interest in relation to Military History, War Memorials & Uniforms / kit. Please explore our website as there is sure to be something of interest to you.
View all posts by gary →
This entry was posted in Honour Roll - British Stories, Military Medals, Missing Militaria - Now Found! and tagged Army Service Corps, British Expeditionary Force, War Medals, Western Front. Bookmark the permalink.