Remembrance Day, also known as ‘Armistice Day’ in some parts of the Commonwealth – is almost upon us for 2010.

It is at the 11th hour, on the 11th day of the 11th month – that we pause for a moments silence and pay our respects to the men and women who have died as a result of war. The tradition going back to 1918, when the official cease fire on the Western Front was honoured and the fields of Flanders and other regions fell silent. However, the treaty which was signed on the 28th of June, 1919 (exactly five years after Archduke Franz Ferdinand was assassinated) was an uneasy one in the eyes of some Germans. Tragically, the world would be engulfed in a Second World War only 20 years later. 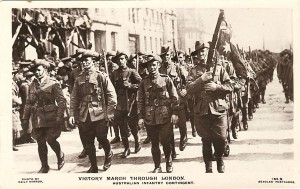 IMAGE RIGHT: Actual photo/postcard of Australian soldiers taking part in a Victory Parade through London in 1919. Note the soldier as viewed on the right of the photograph (actual ‘left marker’ in the parade) has the Australian flag actually hoisted from a Lee-Enfield rifle.

Sadly, Remembrance Day is not allocated the same respect in this modern day and age …… as it did in the years closely following the Great War. In Australia, they hold “the race that stops a Nation” (in 2010, the horse race – The Melbourne Cup fell on the 2nd of November) and yet many of these same people will barely halt their daily lives at the appropriate time, in order to pay their respects and to remember the sacrifice of generations that went before them. It truly is a case of “wrong priorities”. 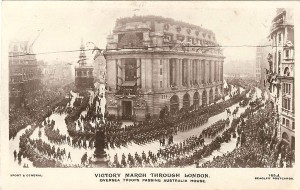 IMAGE LEFT: Actual photo/postcard of British Troops marching through London and passing Australia House in a Victory Parade during 1919. It is images such as this which bring to mind, the haunting painting titled “Eternal Shrine” by artist Will Longstaff. In this artwork, ‘ghosts’ of the fallen parade past The Cenotaph in London on a final march past. To see an image of this painting, please Click Here.

However, it is reassuring to see that there are still some people out there who take the time and effort to commemorate their ancestors’ service in times of war. A point in hand is the case of Robert YOUNG from the United Kingdom. As proof that not every serviceman made a claim for his medals after the war, Robert wrote away to the relevant authorities in England under suspicion that his father had never claimed his medal entitlement. Lance Sergeant Henry Arthur YOUNG (Service Number 5833397) had served on Home Duties during the Second World War with the Royal Engineers; from 1940 through to 1946. It is a well known fact that Britain was under constant air attack from the Luftwaffe as from 1940, and from attack by flying bombs (V1 & V2 rockets) through to 1945. Based on this information, many areas within Britain were under direct threat from air attack and as such, the Medals Gone Missing Administrator was of the opinion that at the very least, Henry was entitled to both the Defence Medal and the 1939-1945 War Medal. As a result of his inquiry, and being Henry’s next of kin – Robert was awarded his father’s World War Two medals. Robert said “They both arrived in plastic presentation boxes with a gold crown on the top and on the reverse, a label with my father’s Military details. It is a shame he is not still alive so that he could see them”. With these two war medals taking pride of place in Robert’s home, no doubt this year will be a very special “Remembrance Day” in the YOUNG household. 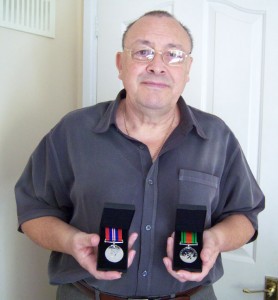 So with Robert’s story as encouragement, if you believe that one of your relative’s may not have claimed his or her war service medals – now is the time to act and to write away. Whether you call it ‘Armistice Day’ or refer to it as Remembrance Day; take the time to write away and find out for certain, what actually happened to your ancestor’s medal entitlement. (For the relevant authorities in your respective Commonwealth nation, please Click Here)

IMAGE LEFT: The “previously unclaimed” war medals of Lance Sergeant Henry Arthur YOUNG. After making the successful claim, his son Robert done a rather professional job in having the medals ‘mounted’ into a frame, accompanied by a photograph of his father. This display will now be a tangible reminder to the family of Sergeant YOUNG; of the service made by previous generations in Britain’s darkest hour.

Why a serviceman would opt NOT to claim his medal entitlement at the end of his war service, can only be speculated upon. Interviews with veterans over the years have revealed a whole array of responses. One particualr response however, from a serviceman who served in a “rear echelon” unit springs to mind. This man had served in the Army Service Corps and in his own opinion, did not feel entitled to put himself up against those guys who “saw real action”. Subsequently, he did not claim his war medals and did not encourage his family to pursue the matter. A sad situation that one man should consider himself ‘unworthy’, especially when the actions of an army are a “team effort”. Try telling any Australian veteran of the Kokoda campaign that the service of the Sally Man (Salvation Army) with his hot cup of black tea near Imita Ridge (when the troops most needed it), was not worthy and valuable service. 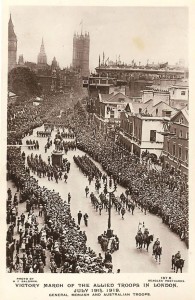 IMAGE RIGHT: Actual photo/postcard featuring Allied Troops as they march through London on a Victory March on the 19th of July, 1919. With the Armistice having been signed approximately 3 weeks before this march took place – many of these troops will have been repatriated home by the time the first official ‘Armistice Day’ is commemorated later in November.

Alternatively, if the war medals of your ancestors were in fact issued ….. but are now “missing”, “lost”, “stolen” or simply “sold” out of the family – NOW is the time to take your first step in securing their return. You need to tell the whole world that you would like to have your family’s lost heritage returned to you. Simply register with Medals Gone Missing (it is free to Register, simply Click Here) and then submit your listing. Whilst it does in fact cost a small fee to submit your medal listing – Medals Gone Missing is a NOT FOR PROFIT website and any fees payable are utilised for the costs and ongoing expenses of the website.

As a special incentive for Remembrance Day 2010, Medals Gone Missing has cut the cost of a Lifetime Listing by 20% and will double the time period of all other listing periods, free of charge. 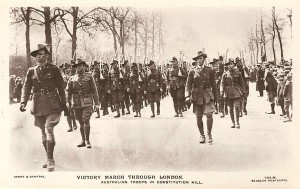 IMAGE LEFT: Photo/postcard of Australian troops as they parade in Constitution Hill, London during a Victory March on the 19th July, 1919. Remembrance Day for these troops from this time on, will not be a celebration of victory; rather the solemn contemplation of lost comrades.’

To read Robert YOUNG’s Success Story and learn how the War Medals of his father were awarded to his family, please Click Here.

Gary Traynor is the volunteer Administrator of the Militaria based website MEDALSGONEMISSING. The aim of this "NOT FOR PROFIT" website is to reunite families, with lost War Medals and other items of militaria. Anything from medals to items of uniform. What Gary refers to as their "lost heritage". He has been actively involved in the Militaria world and researching of Military History for well over 30 years. As a result, Gary also conducts valuations and offers advice on all items of militaria. He has acted as advisor to a number of television and Foxtel productions; including Sir Tony Robinson's "Tour of Duty" series which featured on the History Channel. Gary is a field historian and conducts tours to Gallipoli, The Western Front, Kokoda and many other major battle sites around the world. He was a member of the Australian Army Reserve (UNSWR & 4/3 RNSWR) and served for 23 years with the New South Wales Police Force. He is perhaps the only person who has been employed at the Australian War Memorial in all three capacities .... as a volunteer, part time and full time employee .... starting as a qualified tour guide, working in the public galleries as an Information Assistant and finally Assistant Curator in Military Heraldry & Technology. Medalsgonemissing is a website that will assist you in locating your family's lost war medals and other awards. If you have an ancestor who served in any of the British Commonwealth Armed Services at any time - and whose medals are lost/stolen or simply missing....then so long as the medals are out there - this site will help you to locate them. However the site also contains articles of interest in relation to Military History, War Memorials & Uniforms / kit. Please explore our website as there is sure to be something of interest to you.
View all posts by gary →
This entry was posted in Honour Roll - Australian Stories, Honour Roll - British Stories, Honour Roll - Canadian Stories, Honour Roll - New Zealand Stories, Military Medals and tagged Western Front. Bookmark the permalink.