Percy Thornhill Brooke Clements was born in Barbados 1866.  The youngest of six children to Inspector General of Police John Clements and Ellen Golding.

Major Percy Clements began his military career in the 10th (P.O.W.) Royal Hussars in 1884 and went to South Africa to join the Bechuanaland Border Police in 1893. He took part in the Matabele War, 1893, including the Shangani River Patrol.
Two years later he joined the Matabelcland Mounted Police and took part in the Jameson Raid. 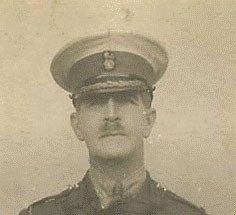 Major Clements served as R.S.M. of the Matabeleland Relief Force and took part in the Rebellion. After the Rebellion he was appointed Deport Sergt.,Major in the B.S.A. Police at Bulawayo. As Company Sergt.-Major he took part in the Mashonaland Rebellion in 1897 and the following year left Rhodesia to join the Cape Mounted Rifles. He served throughout the South African War, includ¬ing the Siege of Mafeking, where he was wounded in the first night sortie.

In 1912 Major Clements was promoted to Lieutenant in the 1st S.A.M.R. which stood for South African Mounted Rifles (old C.M.R.) and fought in World War 1. From 1916 to 1918 he was Adjutant of the 1st S.A.M.R., and in 1917 took part in the Ovamboland Expedition against the rebel chief Mandume.
Major Clements was promoted captain and appointed D.A.Q.M.G., and in 1919 promoted Major and D.A.A.G. in the Permanent Force of the U.D.F. 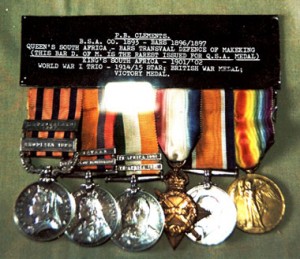 IMAGE LEFT: The missing war medals of Major Percy Thornhill Brooke CLEMENTS.  Whilst it is nice to have such a medal set in your collection, this set of medals is desperately being sought by his descendants.  Can you please help?

Percy Brooke Clements served in 8 regiments and took part in 7 campaigns.  He was awarded the following medals and we would love to have them back in our family.
B.S.A. Co 1893 – bars 1896/1897
Queens South Africa Medal – Bars Transvaal Defence of Mafeking
Kings South Africa Medal – with the 1901 clasp and 1902 clasp.
He was also awarded the First World War Trio – 1914/1915 Star; British war medal and Victory medal