Have you ever tried to locate a person when their surname is SMITH?  Then try to locate a missing First World War medal for what is arguably the most common surname in the western world.

Medals Gone Missing will be the first to admit that searching for any missing war medal, regardless of the surname is often a needle in a haystack.  Luck (some would say fate?) often has something to do with any success.  So in the case of a British War Medal awarded to Charles Gilbert SMITH, perhaps it was a combination of luck and good management? 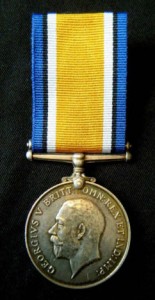 According to the First World War Embarkation Roll, Charles Gilbert SMITH departed Australia’s shores on the 17th November, 1917 from Port Brisbane aboard HMAT Kyarra (A55).  As such, his full medal entitlement consisted of the British War Medal and the 1914-1918 Victory Medal.  These medals were apparently given by a relative to a person who was not connected to the family; complete with the uniform that Charles wore at the end of World War One.

In May 2011, Ken SMITH of New South Wales submitted a listing for his great grandfather’s missing war medals.   The listing on the Medals Gone Missing website was a nine dollar investment and for his money, Ken was buying hope.  Hope that one day, these missing medals would be found.

Medals Gone Missing searches the eBay auction site, amongst others mediums on a daily basis – 365 days per year.  So it is only fair to say that vigilance such as this is sometimes rewarded with a positive result.  In this instance, the name of Charles Gilbert SMITH jumped out at us on the 30th July 2013 and we made immediate contact with Ken.  With only hours to spare, Ken Smith made the decision to undertake the bidding himself.  He was not to be outdone and was successful in winning back his great grandfather’s missing British War Medal.  There were 28 bids on this one particular medal!  Well done Ken! 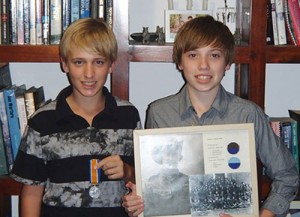 IMAGE LEFT:  Nick and Connor SMITH holding the British War Medal of their great – great grandfather.  Their father, Ken Smith submitted a 5 year listing on the MGM website.  Two years later, we found this missing medal being offered for sale on ebay.  With only hours to spare, we contacted Ken who preferred to make the winning bid himself.  The medal is now safely back with the descendants of Charles Gilbert SMITH.

It is extremely humbling when a family shows such sincere gratitude.  The Medals Gone Missing Administrator was tickled pink to received the following email:-

I would like to once again thank you for your help in locating the British War Medal that belonged to my great grandfather (Charles Gilbert Smith 4409).  The medal has arrived back to the family and we are all thrilled beyond words.  I’ve attached a photo of two of Charlie’s great, great grandchildren with the medal, and I think that the smile on their faces says it all.
To be honest, I never really expected that we would find any of Charlie’s items from the war, and to actually be able to hold this has made us all very happy indeed.  I can say with some certainty, that this medal has not been seen in the family since before Charlie’s death in 1927.  So it has been missing for (at least) eighty six years.
The only other certainty is that without the help of Medals Gone Missing, this medal would never have been found. ….. Let’s hope we can locate the Victory Medal that is still out there too.  Without your help we would not have known about the auction and it would been lost again for years.  Incidentally, the medal is in perfect condition!
All the best,
Ken Smith and family

It is success stories like this which motivate us and I am very pleased that this branch of the SMITH family now have a tangible reminder of one man’s service.

With the Centenary of the First World War upon us, for the sake of a $9 listing you too can tell the world via the Medals Gone Missing website that you are looking for the missing war medals of your ancestor.  It is similar to winning lotto.  If you do not buy a ticket, then you have zero chance of winning.  The same goes for Medals Gone Missing.  If you do not have a listing on the website, then you stand little chance of having your missing war medals returned to their rightful place.

NOTE:  Medals Gone Missing is a NOT FOR PROFIT organisation.  Listing fees are used to maintain this site on the worldwide web.  Our Paypal and Bank Account is always open for scrutiny by any party to ensure accountability.

Gary Traynor is the volunteer Administrator of the Militaria based website MEDALSGONEMISSING. The aim of this "NOT FOR PROFIT" website is to reunite families, with lost War Medals and other items of militaria. Anything from medals to items of uniform. What Gary refers to as their "lost heritage". He has been actively involved in the Militaria world and researching of Military History for well over 30 years. As a result, Gary also conducts valuations and offers advice on all items of militaria. He has acted as advisor to a number of television and Foxtel productions; including Sir Tony Robinson's "Tour of Duty" series which featured on the History Channel. Gary is a field historian and conducts tours to Gallipoli, The Western Front, Kokoda and many other major battle sites around the world. He was a member of the Australian Army Reserve (UNSWR & 4/3 RNSWR) and served for 23 years with the New South Wales Police Force. He is perhaps the only person who has been employed at the Australian War Memorial in all three capacities .... as a volunteer, part time and full time employee .... starting as a qualified tour guide, working in the public galleries as an Information Assistant and finally Assistant Curator in Military Heraldry & Technology. Medalsgonemissing is a website that will assist you in locating your family's lost war medals and other awards. If you have an ancestor who served in any of the British Commonwealth Armed Services at any time - and whose medals are lost/stolen or simply missing....then so long as the medals are out there - this site will help you to locate them. However the site also contains articles of interest in relation to Military History, War Memorials & Uniforms / kit. Please explore our website as there is sure to be something of interest to you.
View all posts by gary →
This entry was posted in Honour Roll - Australian Stories, Military Medals, Missing Militaria - Now Found! and tagged Western Front. Bookmark the permalink.