I am searching for the missing First World War Memorial Plaque (colloquially but incorrectly known as a ‘Death Plaque’) which was commissioned in memory of Trafford Cyril PETTIGREW.

Trafford Cyril PETTIGREW is my great-uncle and his service number was 505.  He served with the 7th Australian Infantry Battalion, Australian Imperial Force and tragically was killed in action on 25 April 1915 somewhere on North Beach near Anzac Cove. 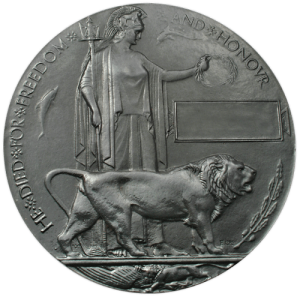 A blank First World War Memorial Plaque, similar to that commissioned in memory of Trafford Cyril PETTIGREW. Trafford served with the 7th Australian Infantry Battalion, AIF and he was tragically killed in action at Gallipoli on 25th April 1915. Can you help this family recover Trafford’s lost Memorial Plaque.

The plaque was taken by deception from my father, Joseph Cyril Pettigrew, in Sydney around 2000-2003, before he died. The person involved purported to represent some sort of museum and took the plaque on loan for a display. My father, an ex-serviceman VX21279, was in his eighties.

Also missing, although I believe legitimately to have been lost, are Traff’s Trio consisting of the 1914-1915 Star, British War Medal and Victory Medal. In 2018 the Department of Defence Honours and Awards section were gracious enough to allow me to claim Traff’s Commemorative Medallion as his nearest surviving next of kin. To me, the plaque represents not only Trafford Cyril’s bravery and sacrifice,  but also the sons, uncles and cousins that were never to be.