Please click on the ABOVE LINK to view our April newsletter No. 1.

The 75th Anniversary of the Japanese midget submarine attack upon Sydney Harbour is less than two months away. #Kuttabul #Japanesemidgetsubmarine #SydneyHarbour 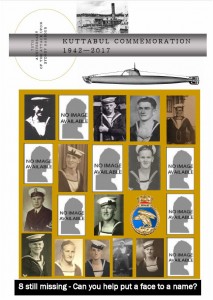 Can you help us find the descendants of these missing Kuttabul crew members? Please view the April newsletter for a list of names.

The Kuttabul Commemoration Project is an organization run by volunteers whose mission is to commemorate the 21 allied sailors and 1 allied airman who lost their lives in the defense of Sydney from 31st May to 8th June, 1942.

Was your ancestor (great-grandfather, grandfather or father) billeted or assigned to the depot ship HMAS Kuttabul at the time of the Japanese midget submarine attack upon Sydney Harbour?  Whether he was on board Kuttabul at the time of the attack or away from the vessel on leave, we would like to hear from you.  Please contact Gary Traynor on email 044 969 2401 or email customerservice@medalsgonemissing.com and tell us his story. 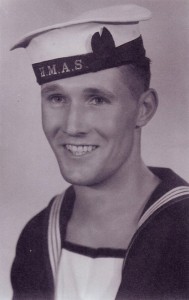 Gary Traynor is the volunteer Administrator of the Militaria based website MEDALSGONEMISSING. The aim of this "NOT FOR PROFIT" website is to reunite families, with lost War Medals and other items of militaria. Anything from medals to items of uniform. What Gary refers to as their "lost heritage". He has been actively involved in the Militaria world and researching of Military History for well over 30 years. As a result, Gary also conducts valuations and offers advice on all items of militaria. He has acted as advisor to a number of television and Foxtel productions; including Sir Tony Robinson's "Tour of Duty" series which featured on the History Channel. Gary is a field historian and conducts tours to Gallipoli, The Western Front, Kokoda and many other major battle sites around the world. He was a member of the Australian Army Reserve (UNSWR & 4/3 RNSWR) and served for 23 years with the New South Wales Police Force. He is perhaps the only person who has been employed at the Australian War Memorial in all three capacities .... as a volunteer, part time and full time employee .... starting as a qualified tour guide, working in the public galleries as an Information Assistant and finally Assistant Curator in Military Heraldry & Technology. Medalsgonemissing is a website that will assist you in locating your family's lost war medals and other awards. If you have an ancestor who served in any of the British Commonwealth Armed Services at any time - and whose medals are lost/stolen or simply missing....then so long as the medals are out there - this site will help you to locate them. However the site also contains articles of interest in relation to Military History, War Memorials & Uniforms / kit. Please explore our website as there is sure to be something of interest to you.
View all posts by gary →
This entry was posted in HMAS Kuttabul, Honour Roll - Australian Stories, Honour Roll - Japanese Stories, Military Medals. Bookmark the permalink.