Help Wanted – What is the history behind the ‘Romsey & District, Victoria’ Badge?

A call for help has been received from Jacquie COOK in New Zealand, in relation to a medallion found amongst her grandfather’s war service medals. 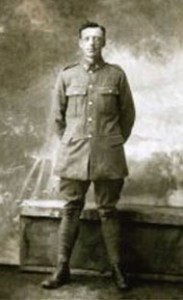 IMAGE RIGHT:  Private Charles Henry COOK, born in Romsey  (Victoria, Australia) he emmigrated to New Zealand circa 1904 and subsequently enlisted into the N.Z.E.F. during the First World War.

Whilst her grandfather, Charles Henry COOK was born in Romsey, Victoria (Australia) during 1888, he migrated to New Zealand when he was 16 years of age.  Subsequently, when the Great War broke out about ten years later – Charles answered the call to Empire and enlisted in the N.Z.E.F. (New Zealand Expeditionary Force) as a member of the 2nd Canterbury Regiment.

The Canterburys had a very proud service history, landing at Gallipoli and rendering spectacular service during the August offensive on the height of Chunuk Bair.  They later went on to service in France and fought in notable actions on the Somme, at Messines and Polygon Wood.  Through to the German Offensive of 1918 and finally finishing on garrison duty in the German city of Cologne.

IMAGE LEFT:  A group shot taken of men from Charles’ unit.  On the rear of the orignal photograph is written “Winners of the Tug-O-War, 2nd Canterbury Battalion”.  Charles is the man wearing on the far right of the image.

Charles survived the First World War, however he passed away in 1943 whilst patronising the RSA (Returned Serviceman’s Association) in Ashburton.   Leaving behind a wife and four children, his medals were donated to the RSA at Ashburton.  However, it was not until many years later that his grand daughter Jacquie took an interest in his war medals and it became evident that Charles was in possession of a medallion – issued by ‘Romsey & District’ for service in the Great War. 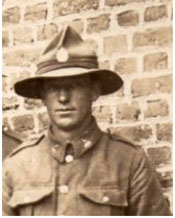 So how is it, that an Australian born – New Zealander came into the possession of a small bronze medallion from the Victorian locality of Romsey?  It was not uncommon for cities, towns and districts to show their appreciation to servicemen and women who enlisted from the subject area.  However, if a man was to enlist from a certain township (in this case – Romsey) he usually returned to this same area after the war.  Even if it was just to catch up with family and friends.  However, in the specific case of Charles COOK – he was transported back to New Zealand after the war and it is unknown how the authorities of Romsey became aware that he had served at all…..let alone in the NZEF? 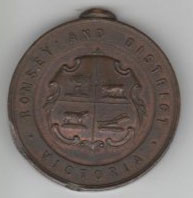 IMAGE LEFT:  The medallion, issued by ‘Romsey & District, Victoria’ showing what appears to be the shire crest.

Whilst it is clearly a ‘post war’ medallion issued to men from the Romsey and District locality who served during World War One, what is not known is the eligibility criteria and subsequently issue of the medal.

Both Jacquie, and the Medals Gone Missing Administrator would be grateful if anybody out there can assist with the following questions:-

1.  Did a serviceman who was born or resided in the Romsey & District area of Victoria – have to apply for such a medallion or was his name simply taken from a shire register?  As Charles was born and grew up in this area unti the age of 16, would the town council or other organisation have made contact with Charles and forwarded the medallion to him, despite the fact that he served in the NZEF ?

2.  Is there anybody out there who also is in possession of such a medallion?  And if so, was it issued to their relative in a similar situation to that of Charles?

3.  As the medallion is inscribed “AIF” , why was it eligible to other members of the Commonwealth?  Or was it simply the case that the issuing authority did not concern themselves with which unit the recipient served – rather their focus was on the “origin” or birthplace of the recipient? IMAGE RIGHT:  The reverse side of the Romsey & District Medallion.  The script around the periphery reads:- “HE RESPONDED TO HIS COUNTRY’S CALL” .  The writing in the centre of the badge states:- Presented to C.H. COOK (engraved) AIF in recognition of his service abroad in the Great War for freedom 1914-18.

Any information in relation to this medallion would be greatly appreciated.

Medals Gone Missing will offer a 5 year listing,  free of charge to anybody who can help Jacquie with her inquiry.

Gary Traynor is the volunteer Administrator of the Militaria based website MEDALSGONEMISSING. The aim of this "NOT FOR PROFIT" website is to reunite families, with lost War Medals and other items of militaria. Anything from medals to items of uniform. What Gary refers to as their "lost heritage". He has been actively involved in the Militaria world and researching of Military History for well over 30 years. As a result, Gary also conducts valuations and offers advice on all items of militaria. He has acted as advisor to a number of television and Foxtel productions; including Sir Tony Robinson's "Tour of Duty" series which featured on the History Channel. Gary is a field historian and conducts tours to Gallipoli, The Western Front, Kokoda and many other major battle sites around the world. He was a member of the Australian Army Reserve (UNSWR & 4/3 RNSWR) and served for 23 years with the New South Wales Police Force. He is perhaps the only person who has been employed at the Australian War Memorial in all three capacities .... as a volunteer, part time and full time employee .... starting as a qualified tour guide, working in the public galleries as an Information Assistant and finally Assistant Curator in Military Heraldry & Technology. Medalsgonemissing is a website that will assist you in locating your family's lost war medals and other awards. If you have an ancestor who served in any of the British Commonwealth Armed Services at any time - and whose medals are lost/stolen or simply missing....then so long as the medals are out there - this site will help you to locate them. However the site also contains articles of interest in relation to Military History, War Memorials & Uniforms / kit. Please explore our website as there is sure to be something of interest to you.
View all posts by gary →
This entry was posted in Honour Roll - Australian Stories, Honour Roll - New Zealand Stories, Military Medals. Bookmark the permalink.

One Response to Help Wanted – What is the history behind the ‘Romsey & District, Victoria’ Badge?