Gallipoli Ballot for 2015? – Why ANZAC Day 2013 with Belmore Travel is a better option for your Gallipoli Historical Tour 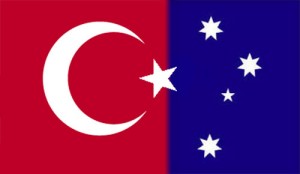 However, not every tour operator is concerned about this ballot.  Especially Belmore Travel from Melbourne who have been conducting tours since their inception in 1988.  And Gallipoli is one of their specialties. 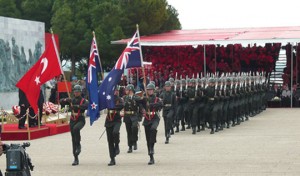 IMAGE RIGHT: Despite the fact that we were once foes, the Turkish people are very gracious to the nations which once stormed their shores.  Side by side, they carry their national flag –  Australian flag and New Zealand flag during their official commemoration near the Turkish Memorial at Cape Helles.

In regards to the 2015 commemoration, some tour organisers have expressed reservations about the Federal Government’s plans to limit the number of people who can attend the 100th anniversary of the landing at Gallipoli.  Information at a recent meeting with the Department of Veteran Affairs indicate that Australia has been allocated only 8,000 tickets for the 2015 commemoration at Anzac Cove which will be distributed in the form of a ‘ballot’ system.  Our New Zealand counterparts have been allocated 2,000 tickets.

IMAGE LEFT: Belmore Travel is located at 324 Belmore Road, Balwyn in Melbourne, Victoria.  For further information, please contact Jason on telephone 03 9857 4555 or click on the above link.

Veterans Affairs Minister Warren SNOWDON is quoted as saying, “Obviously, there will be disappointments through this process because clearly I don’t think we’re going to be able to provide for everyone who wants to attend”. 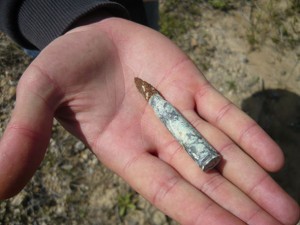 IMAGE RIGHT: Despite the passage of 97 years, battlefield refuse can still be found on Gallipoli.  This Turkish bullet was located on the side of the road on Pine Ridge after the Australian service at Lone Pine during 2012.

It is for this reason that Belmore Travel is continuing to run its ANZAC Day tours in 2013 and 2014 in the lead up to the 100th Anniversary.  “Despite the importance which is being attached to the Centenary of ANZAC, it is imperative that we continue to remember this event in the preceding years” says Medals Gone Missing Administrator – Gary TRAYNOR. 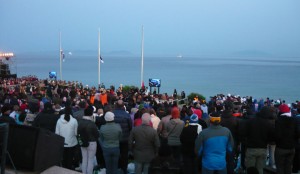 IMAGE LEFT: The still morning air of the Gallipoli Dawn Service, 2012 at North Beach on ANZAC Day.  In terms of numbers, despite the normal ANZAC Day crowds which attended in 2012, it was still quite possible to locate an advantageous position for the actual dawn service.  You can avoid  excessive congestion by attending the 2013 and 2014 ANZAC Day services with Belmore Travel.

Belmore Travel provide an excellent tour package, built around the 25th April.  Unlike other tour operators, they can facilitate your attendance at the three other services pertaining to the British, French and Turkish commemorations. 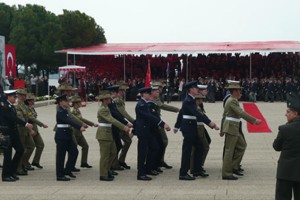 IMAGE RIGHT: The march past of our ANZACS.  Australian and New Zealand servicemen and women taking part in the official Turkish commemoration on the day preceding ANZAC Day, 2012.  Belmore Travel was one of the few travel companies which facilitated the attendance of their group to this event which took place on the 24th of April.  It is a spectacular service and one, not to be missed.

But this is not cheap and uncomfortable ‘backpack’ style travel.  What sets Belmore Travel apart from its competitors is that everything they deliver is in first class comfort.  From the luxury coach transportation to the wonderful hotel accommodation overlooking the Dardenelles. 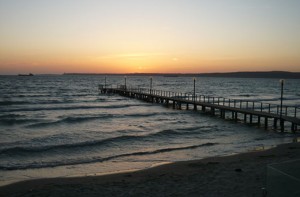 IMAGE LEFT: Sunset over the Dardenelles is spectacular from your Turkish accommodation.  Belmore Travel has selected one of the most attractive settings for you to enjoy your Gallipoli experience.  Not far to the right of where this photo was taken, lays the submerged wreck of the French battleship Bouvet.

So if you are worried about missing out on the ballot for 2015, remember that ANZAC Day is worth remembering during any year and vacancies still exist for the 2013 commemoration.

Gary Traynor is the volunteer Administrator of the Militaria based website MEDALSGONEMISSING. The aim of this "NOT FOR PROFIT" website is to reunite families, with lost War Medals and other items of militaria. Anything from medals to items of uniform. What Gary refers to as their "lost heritage". He has been actively involved in the Militaria world and researching of Military History for well over 30 years. As a result, Gary also conducts valuations and offers advice on all items of militaria. He has acted as advisor to a number of television and Foxtel productions; including Sir Tony Robinson's "Tour of Duty" series which featured on the History Channel. Gary is a field historian and conducts tours to Gallipoli, The Western Front, Kokoda and many other major battle sites around the world. He was a member of the Australian Army Reserve (UNSWR & 4/3 RNSWR) and served for 23 years with the New South Wales Police Force. He is perhaps the only person who has been employed at the Australian War Memorial in all three capacities .... as a volunteer, part time and full time employee .... starting as a qualified tour guide, working in the public galleries as an Information Assistant and finally Assistant Curator in Military Heraldry & Technology. Medalsgonemissing is a website that will assist you in locating your family's lost war medals and other awards. If you have an ancestor who served in any of the British Commonwealth Armed Services at any time - and whose medals are lost/stolen or simply missing....then so long as the medals are out there - this site will help you to locate them. However the site also contains articles of interest in relation to Military History, War Memorials & Uniforms / kit. Please explore our website as there is sure to be something of interest to you.
View all posts by gary →
This entry was posted in Gallipoli, Honour Roll - Australian Stories, Military Medals and tagged Gallipoli - Turkey. Bookmark the permalink.

One Response to Gallipoli Ballot for 2015? – Why ANZAC Day 2013 with Belmore Travel is a better option for your Gallipoli Historical Tour