Corona Virus will not weary us, nor the years of storage condemn. A good news story in time for ANZAC Day! (Walter Joseph HUNT – 162 Australian General Transport Company)

Whilst the title ‘Medals Gone Missing’ indicate what this website is all about, our charter is not simply restricted to the return or missing war service medals.  Every now and then we come across a little gem which has been lost in time …. and the gem, subject of this story once belonged to a man named Walter Joseph HUNT.  Walter served with the 162nd Australian General Transport Company during the Second World War.

But to theorise the fate of how these ‘gems’ survive or even failed to survive; we need to look at some simple facts. 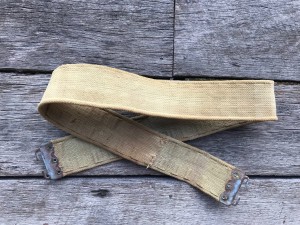 The reverse (back section) of Walter’s Pattern 1937 waist belt, showing the rear 1″ buckles had been removed.

Soldiers, sailors and airmen during the Second World War (or any war for that matter) came from all corners of the globe ….. and all walks of life. They were issued items of kit – namely uniforms, webbing, accoutrements and various pieces of equipment. Many of these men and women scribed their names or service number onto those items and then went about their business.  At war’s end, much of this equipment was returned to respective Q-Stores and these wonderful servicemen and women went back to wherever it was they came. Many simply fading back quietly into civilian life, never to be mentioned in history books or honors lists.  Post war, those pieces of uniform and kit met all different fates. Much was declared obsolete to the armed services and “sold out of service”.  Or in other words, it was sent to Government auctions and sale yards and offered to the general public as surplus.  Many large items, such as aircraft and motor vehicles were sold for scrap value or ended up on farms where they were cannibalised for their countless nuts and bolts. Because brass was used in many small items, pieces of kit were simply cut up …. the brass going to the melting pot with the cotton or leather body of the item being discarded. Sadly, much of the ex-military kit was burnt or went to land fill …. and all of that valuable history was lost.

Wikipedia states “The Darkest Hour” was a phrase coined by British Prime Minister Winston Churchill to describe the period of World War II between the Fall of France in June 1940 and the Axis invasion of the Soviet Union in June 1941. There is little doubt that for Australia, the year 1942 was our “Darkest Hour”.  Singapore had fallen, Darwin was first bombed, Sydney Harbour was attacked by Japanese midget submarines and the battle for the Kokoda Trail was being fought.  To the average Australian, the situation was far more serious than any modern day Corona Virus and we feared for hearths and homes.  One Australian man who answered the call in 1942 to combat that threat, was a Sydneysider named Walter Joseph HUNT. 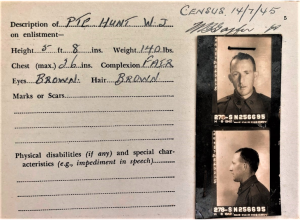 At 32 years of age, Walter HUNT would have been considered an old man by his younger comrades. He was a married man, when he enlisted into the CMF (Citizen Military Forces) and was posted to a little, obscure unit called the 162nd General Transport Company.

From 1939 through to 1945, an Australian General Transport Company was a unit which was a part of the Australian Army Service Corps. Its job was to transport and resupply Australian troops using various types of vehicles including 3-ton trucks, throughout the Middle East and Pacific theatre of operations. An Australian General Transport Company would be tasked to move stores and personnel; as well as distribute supplies, rations, and ammunition wherever they were needed. This type of unit is rarely mentioned in the history books.  And their men are seldom recorded as performing any heroic deeds, or were the recipient of prestigious awards. Their work was often hot, dusty and boring.  Yet there is no doubt they came under enemy fire from time to time, and their lives were sometimes endangered by disease, poor diet, fatigue and dangerous roads.  Without them, an army simply could not function efficiently, and they formed an essential part of the big jigsaw which made up the Australian Military Forces. 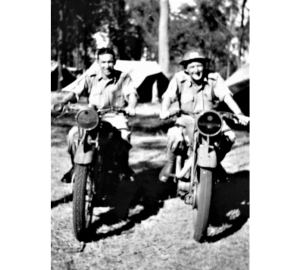 Walter Joseph HUNT (on right wearing helmet) and a comrade pose on motor cycles whilst serving with the 162nd Australian General Transport Company. It is believed this photograph was taken somewhere in Australia. The unit was to serve in Milne Bay New Guinea during 1944.

So when a Pattern 37 waist belt turns up on eBay bearing the name W.J. HUNT and the militia service number N256695, issued to a man from the 162nd General Transport Company … it barely raises an eyebrow amongst the militaria collectors who seek out  collectables.  Especially when the belt has been stripped and is devoid of its brass work.

One can only wonder where the belt of Walter HUNT had been laying for the past 75 odd years?  During that time, it could easily have been tossed into some garbage bin and ended up in land fill, or shoved into the corner of a  shed, where it would gradually succumb to damp and rot.  But by some small fortune it survived …. and every item has a story to tell.

A British Pattern 1937 waist belt was usually manufactured with two small, 1-inch brass buckles stitched to the rear of the belt.  These buckles would accommodate the 1” shoulder braces which supported the weight of the Pattern 1937 ammunition carriers, fixed to the front of the wearer. When the belt was not in campaign use, it was often used to simply decorate the uniform i.e. worn with the General Service Tunic during periods of leave or around barracks. 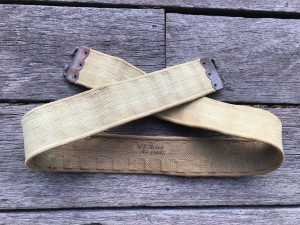 In the case of Walter’s belt, these rear buckles had been removed, which is not uncommon. It is likely the buckles were removed in the post war search for scrap brass. But could it be that they were removed by Walter himself during his service? He was a driver with the 162nd Australian Transport Company which would require him to regularly enter and exit a motor lorry.  Did Walter find that the buckles caused damage to the seat of his lorry or often became snagged on things as he entered and exited the vehicle?  This suggestion is plausible, however the caveat to this suggestion is the fact it was an offence to damage or destroy items of military issue equipment. Did his Commanding Officer turn a blind eye to such things due to practicality?

Many soldiers were issued a new uniform at war’s end.  So is this the belt which Walter used in service between 1942 and 1945?  Or is it in fact his “coming home” belt which he was issued just prior to discharge?  To quote a family member, “Walter was always immaculate and dressed perfectly without a thing out of place”. So perhaps Walter wore this belt when he proceeded home at the end of the war, and then threw it into a cupboard as he re-entered civilian life. The belt being long forgotten, until ending up in his deceased estate and/or put up for sale.  His grandchildren certainly do not seem to have any memory of it. 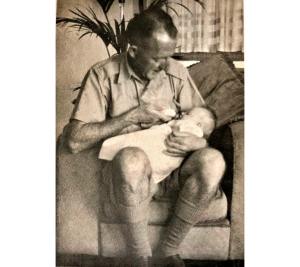 Walter Joseph HUNT was on deployment to New Guinea when his first born child, baby Maureen came into the world during January of 1943. This places Walter in or around Port Moresby during the battle for the beach heads of Buna, Gona and Sanananda which ended the Kokoda campaign.

Fortunately in the case of Walter’s belt, there is a happy ending to this story.  And this story is as much a tribute to the wonderful work of leading history researcher – Sandra Smith of Medals Gone Missing ….. as it is to a wonderful little relic of the Second World War.   Whenever a challenge is put to Sandra …. she rarely fails to find some descendant or other of any given serviceman. And in this instance, Sandra has managed to locate a granddaughter of Private Walter Joseph HUNT.

Walter’s family sent through some photographs of their grandfather’s face, knowing that his World War Two service belt had been found.  A Pattern 37 waistbelt which he would have worn over 75 years ago!  For the volunteers of Medals Gone Missing …. it is always a tremendous thrill to see the face and look into the eyes of a person who starts off as ‘just a name’ and becomes subject of their research.

But an even bigger thrill will be returning this valuable family link to a bygone digger …. On ANZAC Day 2020!

Walter Joseph HUNT once signed his name on a piece of paper, stating he was prepared to give his life if necessary, in service of his country.  He served on dusty roads in Australia and New Guinea.  The Japanese did not get him …. and he survived the risk of motor vehicle accident, malaria, dysentery, the threat of tropical ulcers and scrub typhus.  His Pattern 37 belt survived the war and 75 years of dubious storage.

The very least we can do this ANZAC Day, is ensure that Corona Virus (Covid 19) does not dampen his memory or cast a shadow over his service!  Returning his wartime belt to is grandchildren on the 25th of April will be the highlight of our day!

Gary Traynor is the volunteer Administrator of the Militaria based website MEDALSGONEMISSING. The aim of this "NOT FOR PROFIT" website is to reunite families, with lost War Medals and other items of militaria. Anything from medals to items of uniform. What Gary refers to as their "lost heritage". He has been actively involved in the Militaria world and researching of Military History for well over 30 years. As a result, Gary also conducts valuations and offers advice on all items of militaria. He has acted as advisor to a number of television and Foxtel productions; including Sir Tony Robinson's "Tour of Duty" series which featured on the History Channel. Gary is a field historian and conducts tours to Gallipoli, The Western Front, Kokoda and many other major battle sites around the world. He was a member of the Australian Army Reserve (UNSWR & 4/3 RNSWR) and served for 23 years with the New South Wales Police Force. He is perhaps the only person who has been employed at the Australian War Memorial in all three capacities .... as a volunteer, part time and full time employee .... starting as a qualified tour guide, working in the public galleries as an Information Assistant and finally Assistant Curator in Military Heraldry & Technology. Medalsgonemissing is a website that will assist you in locating your family's lost war medals and other awards. If you have an ancestor who served in any of the British Commonwealth Armed Services at any time - and whose medals are lost/stolen or simply missing....then so long as the medals are out there - this site will help you to locate them. However the site also contains articles of interest in relation to Military History, War Memorials & Uniforms / kit. Please explore our website as there is sure to be something of interest to you.
View all posts by gary →
This entry was posted in Honour Roll - Australian Stories, Military Medals, Military Memorabilia, Missing Militaria - Now Found!. Bookmark the permalink.