Brothers At Arms – The Fisher Family Sacrifice At Pozieres

The term “Brothers At Arms” has been used on many occasions to describe the bonds formed between men, during times of war.  I have written about the CRESWICK brothers (Norman & Thomas) from country New South Wales; and the MANUSU boys (Percy, Guy, Perry, Homer & Cyril) from Bowraville, Australia.  Indeed, many of us have seen the American feature film titled ‘Saving Private Ryan’ which is loosely based on the story of the NILAND brothers (Frederick, Robert, Preston & Edward NILAND) from Tonawanda in New York.  And the outstanding television series titled ‘Band Of Brothers’ which details the actions of the 501st Parachute Regiment, 101st Airborne Division.  Perhaps one of the most famous stories of a single family’s sacrifice in war, is that of the SULLIVAN brothers.  All five men (George, Francis, Joseph, Madison & Albert SULLIVAN) were killed as a result of the sinking of the American Light Cruiser, U.S.S. JUNEAU during Worlde War Two.

But for every story about maternal “Brothers At Arms” that comes to our attention ….. hundreds of similar stories go untold.  One tragic tale involving the ‘FISHER’ family from Western Australia has been offered by Kel Fisher of Murdoch.  This story concerning his Great Uncles (Osborne, Walter, William & Benjamin)  is a story of four brothers, who were born to William and Elizabeth Fisher in New South Wales.  They would re-establish themselves on the othe side of continental Australia and it was from this state that they would enlist.  However, only one would survive the result of two wars, in defence of the British Commonwealth.

The eldest of the four brothers, Benjamin would die as a result of service during the Second Anglo-Boer War 1899-1901; more commonly referred to simply as ‘The Boer War’).  Serving with the 6th Mounted Infantry Contingent, he would be killed in action near Carolina on the 15th of May, 1901.

Just thirteen years later, the Great War would break out and again – Australians would answer the call for the mother country.  The first of the three surviving brothers to enlist would be Osborne FISHER with the Service number of 3106.  An older recruit by average standards, he was 38 years of age at the time of his enlistment.  After initial basic training at Blackboy Hill; the First World War Embarkation Roll indicates that he boarded HMAT Themistocles from Fremantle on the 13th of October, 1915.  Leaving Australia’s shores prior to the end of 1915 entitled him to the award of the 1914-1915 Star, but sadly – this would be a posthumous award.  At this time of embarkation, Osborne was allotted to the 16th Infantry Battalion, AIF.  One of the most famous of Western Australian units to have served in the Australian Imperial Force (their sons, a generation later would find themselves fighting on the Kokoda Track during 1942). 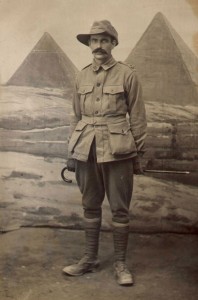 IMAGE RIGHT:  Private Osborne FISHER (Service Number 3106) 48thInfantry Battalion, AIF.  Despite the background being an artistic reproduction of the Egyptian pyramids, it is likely that this studio photo was taken in Western Australia – prior to Osborne’s embarkation.  Whilst this is merely speculation, a close examination of his uniform clearly shows the metal ‘numerals’ and ‘INF’ embellishments on his epaulettes (more than likely, that of the 16th Infantry Battalion).  Certainly by early 1915, all units abroad had been issued with their respective unit colour patches.  Clearly, as Osborne did not leave Fremantle until October, 1915 and as his uniform is devoid of colour patches, this supports the “pre-embarkation” theory.

Arriving too late to see service on Gallipoli, he was part of the great AIF restructure in early 1916 – which saw a ‘doubling’ of the AIF.  Subsequently, he was transferred to the 48th Infantry Battalion and it would be with this unit that he would loose his life.   The Commonwealth War Graves Commission records indicate that he was killed during the battle of Pozieres on the 6th of August, 1916.  However this date is contradictory to an eyewitness account which claims that Osborne was seen alive on the morning of the 7th of August.  The witness claims that Osborne was struck by a High Explosive shell and killed instantly.  His body was never found and his name is recorded on the Villers-Bretonneux Memorial. 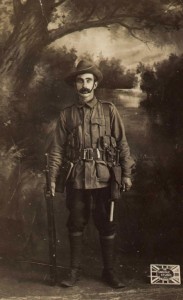 IMAGE LEFT:Studio portrait of Private Walter Stanley FISHER (Service Number 4272) of the 48th Infantry Battalion.   He is shown here wearing full “battle order” of Pattern 08 Infantry Webbing and SMLE rifle.  If both Osborne and Stanley retained their moustaches during the battle for Pozieres, their family resemblance is such that they could easily be mistaken for eachother.  A possible explanation for the discrepancy in the date of death as recorded for Osborne.

Walter Stanley FISHER was the next brother to enlist, in September of 1915.  Allocated the Service number 4272, he too left Australia as part of the 16th Infantry Battalion.  Boarding HMAT Runic at Fremantle on the 29th of  January, 1916 – he was aged 31 at the time of embarkation.  Although christened ‘Walter’, he was commonly known to friends and family as Stanley.   Just like his older brother Osborne, Stanley too was transferred to the 48th Infantry Battalion.  It is highly possible that Stanley was “claimed” by Osborne at this time, as was sometimes the practice in the AIF – allowing brothers to serve in the same unit.  Family tradition has it that Stanley was in hospital near Pozieres when he heard that his brother was ‘going into action’.  It is said that Stanley discharged himself and re-joined the unit, in time to accompany his brother Osborne to the frontlines.  Tragically, Stanley also lost his life at Pozieres – the Commonwealth War Graves Commission recording his date of death as being the afternoon of the 6th  August, 1916.  Like that of his brother, Stanley’s body was never found and his name too is recorded on the Villers-Bretonneux Memorial.

The Australian Army suffered over 23,000 casualties in -and around Pozieres.   The FISHER boys, Osborne and Stanley were part of the tally totalling 7,000 Australian men who lost their lives within site of the Pozieres Windmill.   C.E.W. BEAN (Charles Edwin Woodrow Bean – Official Australian Historian of the 1914-1918 War) would later state that this area was “more densely sown with Australian sacrifice than any other spot on earth”.

The last of the FISHER boys (and the only one to survive the war) was William Joseph FISHER.  He embarked from Fremantle on the 29th of  January, 1917 as part of the Reinforcements and Special Draft (February 1917 – October 1918) to the Railway Unit; aboard HMAT Miltiades.  With the service number 922, he held the rank of 2nd Corporal – however he left Australia knowing full well that he was the only remaining son of William and Elizabeth.  He also left behind a wife ….. Francis Ellen Fisher.  He would become the casualty of poisonous gas on a number of occasions, resulting in the eventual loss of a lung.  He returned home to Australia in 1919. 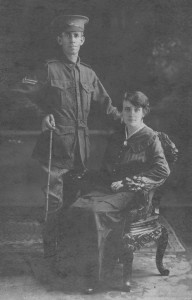 No doubt, history is full of similar stories of these “Brothers At Arms” from all corners of the world.  In the blink of an eye, an entire generation of one particular family can be wiped out ….. and the void left in that home can never be filled.  It is for this reason that every Armistice Day – we should stop for that brief pittance of time – and remember the sacrifice made by those generations before us.

In most instances ….. the only thing that we have to remind our families of loved ones, lost ….. is a few war medals.   However, in the case of the FISHER family who lost a “generation” through war, even that small token is “lost”.  The war medals of Private Osborne FISHER are missing; as is his ‘Death Plaque’.  The same fate has befallen the war service medals awarded to his youngest brother, Private William Joseph FISHER.  Do you have these medals in your collection?  Or do you know of their whereabouts?  If you could assist Kel to recover the medals of his great uncles, no doubt – the FISHER family would be most grateful …… and the missing war medals of these two brothers can be re-united with those of Stanley.  Only when this task is done, will these three brothers be back together again. 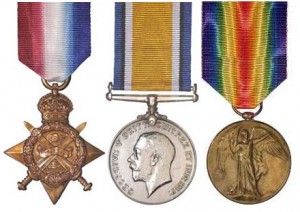 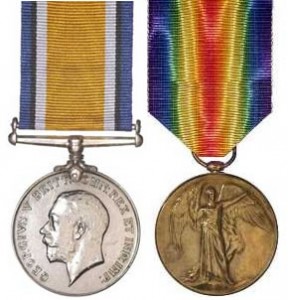 DOES YOUR FAMILY HAVE A SIMILAR STORY? IF SO, PLEASE FEEL FREE TO CONTACT THE MEDALS GONE MISSING ADMINISTRATOR FOR YOUR STORY TO BE TOLD.

Gary Traynor is the volunteer Administrator of the Militaria based website MEDALSGONEMISSING. The aim of this "NOT FOR PROFIT" website is to reunite families, with lost War Medals and other items of militaria. Anything from medals to items of uniform. What Gary refers to as their "lost heritage". He has been actively involved in the Militaria world and researching of Military History for well over 30 years. As a result, Gary also conducts valuations and offers advice on all items of militaria. He has acted as advisor to a number of television and Foxtel productions; including Sir Tony Robinson's "Tour of Duty" series which featured on the History Channel. Gary is a field historian and conducts tours to Gallipoli, The Western Front, Kokoda and many other major battle sites around the world. He was a member of the Australian Army Reserve (UNSWR & 4/3 RNSWR) and served for 23 years with the New South Wales Police Force. He is perhaps the only person who has been employed at the Australian War Memorial in all three capacities .... as a volunteer, part time and full time employee .... starting as a qualified tour guide, working in the public galleries as an Information Assistant and finally Assistant Curator in Military Heraldry & Technology. Medalsgonemissing is a website that will assist you in locating your family's lost war medals and other awards. If you have an ancestor who served in any of the British Commonwealth Armed Services at any time - and whose medals are lost/stolen or simply missing....then so long as the medals are out there - this site will help you to locate them. However the site also contains articles of interest in relation to Military History, War Memorials & Uniforms / kit. Please explore our website as there is sure to be something of interest to you.
View all posts by gary →
This entry was posted in Honour Roll - Australian Stories, Military Medals and tagged Western Front. Bookmark the permalink.