Stories of  “mateship” – during times of war; are universal.  It does not matter from which corner of the globe they came from.  Whether on the battlefields of Europe, Russia and North Africa, or in the steaming jungles of the Pacific – the tales all have a common thread .  But the bond forged between men under fire, can form a friendship that endures the test of time.  And for Australian diggers, Bede Tongs M.M. and Owen Baskett of the 3rd Militia Battalion – their friendship has endured for over 67 years. 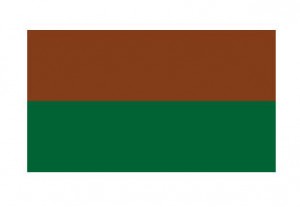 Bede George TONGS was born on the 27th of June, 1920 at Narrandera in New South Wales.  So when he was leading his men as a platoon Sergeant through the jungle of the Kokoda Track – he had only just turned 22 years of age.  He had joined the 3rd Militia Battalion C.M.F (Citizens Military Forces) on the 24th of February, 1940.  His service number was N43917.  When Bede discharged from the AIF nearly six years later, he had transferred to the 2/3rd Battalion (NX126952)…. been commissioned to the rank of Captain, and had been awarded the Military Medal.

IMAGE LEFT:  The Military Medal as awarded to Sergeant Bede TONGS during fighting at Templeton’s Crossing.

His mate, Owen James BASKETT was born in the small New South Wales township of Moruya.  He too enlisted into the 3rd Militia Battalion and served on the Kokoda Track.  With the service number, N268139  he was a young lad of 20 when he faced the seemingly ‘unstoppable’ Japanese war machine in the Owen Stanleys.  By this time, the 39th and 53rd Militia Battalions had been worn to breaking point.  The AIF 21st Brigade was broken but not beaten…fighting a brutal withdrawal when the 3rd Battalion entered the fray.  In a little known fact, the 3rd Militia Battalion would end up the longest serving unit on the Kokoda Track.  And if you speak to Owen now, he will tell you squarely “If it wasn’t for Bede, I wouldn’t be here now.  He saved my life”. 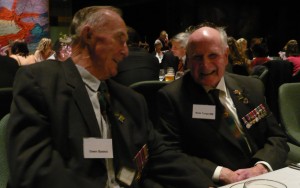 Owen was referring to an action which occurred on the 17th of October, 1942 during fighting at Eora Creek.   Modern day trekkers on the Kokoda Track know the general area as “Templeton’s Crossing 2” and it’s beauty in this modern era is a stark contrast to the horrendous fighting which took place here at that time.   Their platoon commander, Lieutenant Colin Horbury RICHARDSON (10 platoon) had been hit by gunfire, high on the left side of his chest.  Frothy blood emitted from the wound, signifying that he had been hit in a lung and despite being ordered to continue with the attack, Bede decided that their officer should be evacuated before they would proceed.  Bede thought that RICHARDSON was dying, but miraculously he would eventually survive and discharged in 1944.

Bede placed his sections two up, with one in reserve and informed his men that they would advance by way of  ‘fire and movement’.  Owen later said,  they had been ordered to “fix bayonets” and he believed that should the order come to attack in the face of whithering fire – surely he and many of his mates would be killed.  What is clearly evident – is that Bede Tongs was a ‘risk taker’ with his own life; but not with the lives of his men.  Sending his men to ground, Bede himself advanced along a fire lane that had been cut by the Japanese to afford a good field of fire.   Crawling down this fire lane – his rifle in his left hand, Bede took the pin from a 4 second grenade (Mills Bomb 36M) and kept his body pressed as close to the ground as he possibly could.  The Japanese had left some shrubbery  in place which afforded minimal cover.  At this time, Bede possibly thanked his good fortune at being a little short in stature.

The thought had crossed Bede’s mind that “This is a dangerous thing to be doing”.  When Bede was to look up, he found himself staring down the barrel of a Japanese light machine gun a short distance away.   Bede would state that the two Japanese gunners manning the weapon were committing the cardinal sin of  “not watching their front” and were looking off to their left.   Being careful not to attract the attention of the Japanese, Bede held his hand grenade  close to the ground and carefully released the striker lever so that it sprung into the mud.   He allowed  for one second to pass before throwing the grenade into the Japanese weapons pit.  A second grenade quickly followed, whereupon he forced the rim of his Brodie pattern helmet into the mud to shield his face from the explosions.  The Japanese machine guns were always displaced, so that they were supported from the flanks by other guns.  These supporting weapons immediately began a concentrated fire towards Bede’s  position.  Looking up, he saw smoke over the gun position with no signs of activity – and bolted back to his platoon.  It was this action which would earn Bede, the Military Medal.    It also left no doubt in Owen Baskett’s mind, that Bede had taken great personal risk – to minimise the danger for his platoon. 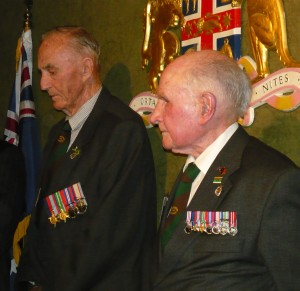 IMAGE RIGHT:  Owen Baskett (left) and Bede Tongs reflect in a sombre moment, during the formalities of the evening at Parliament House.  Note the Battalion colours depicted on the 3rd Battalion Association ties worn by Owen and Bede.

Before the fighting at Eora Creekwas over, having suffered with the illness for some time – Owen would finally succumb to the effects of Malaria which required him to be medically evacuated.  Bede would push through to Kokoda village, arriving on the 6th of November.  When speaking of the Australian flag which had been erected at Kokoda just 3 days before, Bede said “The appearance of the flag is still one of the greatest sights I can picture in my mind”.

Gary Traynor – Administrator of Medals Gone Missing and trek leader for Kokoda Historical  had the privilege of escorting veteran Owen Baskett to a reunion dinner at Parliament House in Sydney on the 7th of August, 2009.   His platoon sergeant and good mate, Bede Tongs was guest speaker and he was supported by his son, Garry Tongs.  Bede held a captive audience spellbound, with his harrowing account of the Kokoda campaign.    Bede has written an unpublished account of the deeds performed by the 3rd Militia Battalion – which is currently being edited by his son and this will no doubt do justice to the memory of the men – of this little known Battalion.  A battalion which is so often overlooked by some authors.  To share a meal at the head table, with veterans:- Bede Tongs and Owen Baskett was truly an honour and one of the highlights of my Kokoda experience.  Owen’s daughter Beverly was also present; and I could not help but think how fortunate it was that both herself and Garry were even there…..considering the extreme dangers faced by their fathers on the Kokoda Track and in later campaigns.  Both Owen and Bede had narrow escapes during the war.  A piece of shrapnel embedding itself in Owen’s leg from a Japanese Mountain Gun whilst at Eora Creek in 1942. 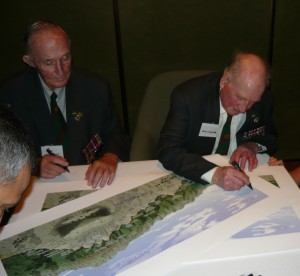 IMAGE LEFT:  Owen and Bede sign commemorative prints showing the topography of the Kokoda Track for patrons of the Kokoda Reunion Dinner.

For one night, these two veterans were the centre of attention and admiration for a room full of young people who had walked the Kokoda Track- as modern day trekkers.  If fact, the attention bestowed upon them was not unlike that of  “rock stars”.  And if you were to ask anybody there that night…..it was VERY well deserved.   These men do not regard themselves as anything special, but to this generation – they are national treasures.  It will truly break my heart when this generation of  “mates” is with us, no longer. 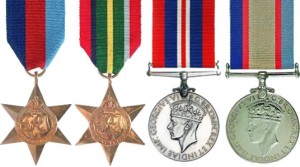 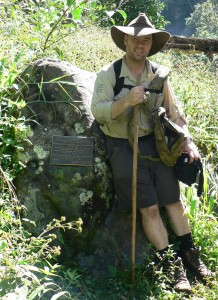 IMAGE LEFT:  Medals Gone Missing Administrator, Gary Traynor on the Kokoda Track – in 2008 near the memorial dedicated to the 3rd Militia Battalion, A.M.F.   This plaque is situated adjacent to Eora Creek, on the opposite side of the river to where the 1942 village was located.   This locality is to the north of  Templeton’s Crossing, where Bede won his Military Medal.  The plaque was laid by Bede and Garry Tongs in the mid 1980’s and is on the south side of the rock itself.   As the bridges over this part of Eora Creek are often washed away by flooding, trekkers along this part of the track may need to search along the western river bank to view this memorial.

WISH TO LEARN MORE ABOUT BEDE TONGS & OWEN BASKETT?   Trek the Kokoda Track with Kokoda Historical who tell the story of the 3rd Militia Battalion between Ioribaiwa and Kokoda Station; including a 6 man patrol led by Sergeant Tongs M.M. into “No man’s Land” between Kagi and Templeton’s Crossing 2.   Simply visit the Kokoda Historical website on www.kokodahistorical.com for further details and trek dates.

Recommended Reading:  Blood and Iron  by Lex Macaulay gives a very detailed account to the campaign as experienced by Sergeant Bede Tongs M.M.  and the 3rd Militia Battalion.