Richard Henry BROMLEY served in the Australian Army during World War Two, defending the far north city of Darwin from Japanese air attack as a member of the Darwin Coast Artillery.  Which leads us to ask the question ….. is he a relative of yours?

A Second World War belt (Pattern 37 waist belt) issued to Gunner Richard Henry BROMLEY (Service Number VX100301) turned up on eBay during January 2018 and it was purchased by the Medals Gone Missing team in the hope we can track down his descendants. 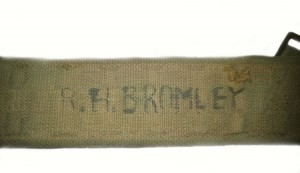 Amazingly the Pattern 37 waist belt issued to Richard Henry BROMLEY was located on eBay Australia and purchased by the Medals Gone Missing team.

Richard Henry BROMLEY was born on the 5th November 1912 in Mildura, Victoria.
According to the World War Two Nominal Roll, Allen enlisted into the AMF (Australian Military Forces) and it appears he may have transferred to the AIF (Australian Imperial Force) on 12th March, 1941.  His next of kin was recorded as being Richard BROMLEY who we believe was his father.  Richard served with the Darwin Coast Artillery and remained in the AIF until January 1946. 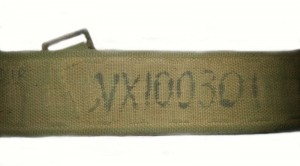 Whilst the Pattern 37 waist belt was a type manufactured and issued in their hundreds of thousands to Commonwealth troops, it is rare to actually find a relic which bears the name of your particular ancestor. It is hoped descendants of Richard Henry BROMLEY can be found and this valuable memento returned to his family.

This waist belt in question clearly bears Richard’s service number VX100301 and his name ‘R.H. BROMLEY’ which likely was written by Richard himself in black ink.  Despite the fact these type of belts were manufactured in the hundreds of thousands …. and every serviceman had one (including Navy and Air Force), it is very rare that this belt has survived in such good condition.  This relic was purchased by Medals Gone Missing online via eBay and is not for general sale.  It will only be sold back to the descendants of Richard Henry BROMLEY upon strict proof of relationship.

The World War Two British Pattern 37 waist belt issued to Gunner BROMLEY amazingly was located on eBay Australia and was purchased by the Medals Gone Missing team in the hope that his descendants can be located.

Gary Traynor is the volunteer Administrator of the Militaria based website MEDALSGONEMISSING. The aim of this "NOT FOR PROFIT" website is to reunite families, with lost War Medals and other items of militaria. Anything from medals to items of uniform. What Gary refers to as their "lost heritage". He has been actively involved in the Militaria world and researching of Military History for well over 30 years. As a result, Gary also conducts valuations and offers advice on all items of militaria. He has acted as advisor to a number of television and Foxtel productions; including Sir Tony Robinson's "Tour of Duty" series which featured on the History Channel. Gary is a field historian and conducts tours to Gallipoli, The Western Front, Kokoda and many other major battle sites around the world. He was a member of the Australian Army Reserve (UNSWR & 4/3 RNSWR) and served for 23 years with the New South Wales Police Force. He is perhaps the only person who has been employed at the Australian War Memorial in all three capacities .... as a volunteer, part time and full time employee .... starting as a qualified tour guide, working in the public galleries as an Information Assistant and finally Assistant Curator in Military Heraldry & Technology. Medalsgonemissing is a website that will assist you in locating your family's lost war medals and other awards. If you have an ancestor who served in any of the British Commonwealth Armed Services at any time - and whose medals are lost/stolen or simply missing....then so long as the medals are out there - this site will help you to locate them. However the site also contains articles of interest in relation to Military History, War Memorials & Uniforms / kit. Please explore our website as there is sure to be something of interest to you.
View all posts by gary →
This entry was posted in Honour Roll - Australian Stories, Military Medals, Military Memorabilia, Missing Militaria - Now Found! and tagged Anzac Day, Pattern 37 waist belt, Remembrance Day, World War 2 Australian uniform. Bookmark the permalink.