A Handbag On The Battlefield? – It’s Not Wise To Insult A Scotsman & His Sporran! 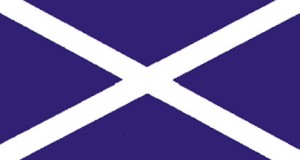 The legacy of ‘Military History’ …… it is amazing just how often, traces of it appear in everyday life – and how the origins of certain traditions are overlooked by people in this modern society.  Evidence of militaristic invention, work practice and “lessons learnt” come and go through our daily schedule; without us even sparing a thought to the past.

Advances in heavy industry, aviation and medicine were brought about as a result of warfare.  Virtually everything we touch, see or communicate with has been manufactured using technology that had some origin or bearing on a “war effort”, at some time or another. 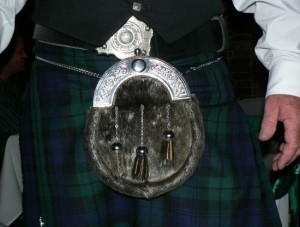 IMAGE RIGHT: The sporran (design of which can be traced back as far as the 14th Century) being worn by a “bridegroom” during a wedding ceremony in 2010.

However, it is the age old traditions (of a military nature) which still hold appeal to us in many cases.  One such example became a point for discussion at a recent function which I attended .  Namely a wedding ceremony in which the bridegroom was adorned in Scottish attire – complete with tartan kilt, sporran and dirk.  At this wedding reception – a discussion in jest arose, regarding the groom’s sporran and the insinuation that this article could be classed as a “man-bag” or man’s handbag.

The sporran – spelt “spor·ran” OR (spôrˈən, spŏrˈ-) in Gaelic, is a pouch made from leather or animal fur – which is worn at the front of the kilt in the traditional dress of the Scottish Highlands.  It’s origin is said to be Scottish Gaelic ‘sporan’ and roughly translates to purse, or from Middle Irish sparán, or possibly from the “Late Latin” word bursa meaning “ bag”.  Clearly, as the kilt did not have pockets for which to carry one’s belongings; the sporran was used for the general purpose of carrying virtually anything. 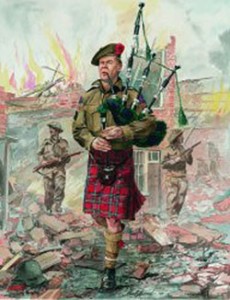 IMAGE LEFT:A Piper of the 51st Highland Division (circa 1944) as depicted by artist Alan Herriot.  The Highlander’s Sporran can clearly be seen in this image.  It may surprise some to learn that occurrences such as the one depicted in this painting, are not fanciful examples of ‘artistic licence’.   Bill MILLAN landed at Sword Beach on D-Day (6th of June, 1944) and played the pipes, whilst men were shot down around him.  Being the personal piper of Lord Lovat, Bill also played at Pegasus Bridge when Lord Lovat’s men relieved the beleaguered Glider troops who had captured the bridge over the Caen Canal earlier that morning.  Sadly, Bill passed away in August, 2010 aged 88.  Click Here to read Bill’s story.

In the case of our modern ‘wedding’, the bridegroom wore the full regalia which also included the ceremonial dagger in his stocking.  However, the sporran and assorted accoutrements were not merely for decorative attire – to be worn on ceremonial occasions.  To draw from an article featured in the “My Armoury.com” website, written by Chad Arnow:- The Scots of the Middle Ages and renaissance spent much of their time in conflict whether warring with England for independence or fighting with other clans for local dominance. As such, the Scots were known to go through their daily lives fully or nearly fully armed, more so than other Europeans of the time. A quote by John Hume perfectly illustrates this: “Thy [the Highlanders] always appeared like warriors; as if their arms [weapons] had been limbs and members of their bodies they were never seen without them; they traveled, they attended fairs and markets, nay they went to church with their broadswords and dirks.”  To read the full article, please Click Here.

As the sporran at this particular wedding drew considerable interest as to whether (in modern terms) it constituted the classification of a “purse” or a “handbag”,  Medals Gone Missing decided to seek a professional opinion.  A Google search located a number of websites, one of which was a company called “Designer Devotion” operated by Sevinc YENYIL (www.designerdevotion.com.au) Upon perusal of the images supplied, Sevinc indicated to us that this particular Sporran constituted a “Clutch”, by manner of it’s opening and fastening.  She went on to explain that whilst the sporran can be dated back as far as the fourteenth century; it was not until the late seventeenth century and early eighteenth century – that sporrans were fitted with metal clasps to secure their closure.  These clasps were usually made from brass or other metals, however she indicated that more ornate clasps could be made for people of a ‘higher standing’ within the clan.  Sevinc indicated that there are many examples of clasps made from the metal ‘silver’ in various museums around Scotland and perhaps these are examples of clasps made for nobles and “clan chiefs”.  Whilst her company Designer Devotion technically did not specialise in sporrans, she indicated that there are certainly some similarities between the age old sporran and the modern day ‘hand bag’ …. or ‘Designer Clutch’ as utilised by modern women.  However, Sevinc concluded by saying that perhaps the “bum bag”, which was big in the late 80’s – was a closer cousin to the sporran than the “hand bag”. 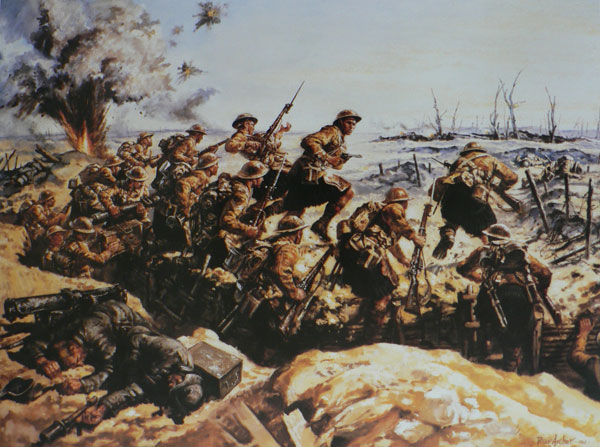 IMAGE RIGHT:  This print, taken from the painting titled “Fighting Spirit” by Peter Archer was purchased in Scotland during a tour in 2008.  The artwork shows the Argyll and Sutherland Highlanders – having captured one German MG08 machinegun,  going “over the top” of the trenches to capture a second enemy position during the First World War. 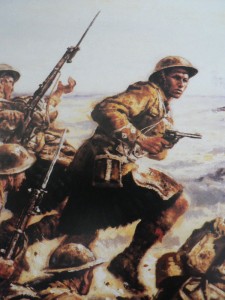 IMAGE LEFT:  A close up view of the Scottish Officer brandishing his Webley revolver as he leads his men from the front.  His tartan kilt is plainly evident in this picture.

Whether fighting the English on the Scottish Border during the 17th Century ……. or storming the beaches of Normandy in 1944; the Highlanders earned a reputation as brave and fearless warriors.  Whilst it is true that at one time during the Great War; the Germans referred to the Black Watch (Royal Highland Regiment) as the “Ladies from Hell” due to their kilts resembling a lady’s skirt.  To suggest that a Scotsman carries a handbag or a ‘purse’ around his waist is simply asking for trouble.  The Sporran is a proud part of the Highlander’s national dress and their fighting prowess is world renown.   So regardless of who wears this Scottish regalia and for which occasion; it is good to see that some traditions are still upheld and that this symbol of Highland manhood has survived the test of time.

Medals Gone Missing would like to thank Sevinc Yenyil of Designer Devotion for her informative assistance regarding this article.